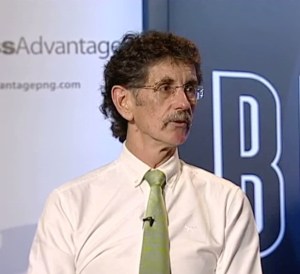 ‘Our business has done well there and continues to grow and to profit, he says.

‘The market share is probably still around the 22-23 per cent: it’s a good contributor to BSP. In the Solomon Islands, we’re now at 60 per cent market share or thereabouts.’

Fleming says the Cook Islands is a small market, but the results have been encouraging. ‘It’s certainly responded well in terms of its staff, although there is probably not as much growth opportunity.

‘But branding and the staff’s effort are performing quite well.’

‘Westpac, PNG’s oldest bank, now focuses its efforts in the Pacific on the two largest markets, PNG and Fiji.’

Fleming says the company’s operations in Tonga have been excellent. ‘Samoa’s done quite well. Vanuatu, the most recent one to join the BSP family, has shown in the last three months that we can move from the 10-12 per cent market share within a two-to-three year period, which is something that we’d expect.’

Fleming says BSP’s strategy is ‘not just to steal customers from other banks’; it is also to achieve organic growth.

Westpac, PNG’s oldest bank, now focuses its efforts in the Pacific on the two largest markets, PNG and Fiji.

In early 2015, the bank announced it had entered into an agreement to sell its operations in Samoa, Cook Islands, Solomon Islands, Vanuatu and Tonga to BSP for A$125 million (K294 million) and this was completed last year.

‘We always have to a certain degree concentrated our Pacific footprint on Fiji, where Westpac’s the longest serving bank—we’ve been there over 114 years—and PNG, where we were the first bank,’ says Greg Pawson, Westpac’s Regional Head for South Asia Pacific.

‘So, those two businesses for us have always been important, not just in the context of the Pacific, but even outside of our core domestic markets of Australia and New Zealand. The main reason is obviously the legacy: the fact that we’ve been there for so long.’

Pawson describes ‘history and legacy’ as Westpac’s strengths. ‘In April, the bank celebrated 200 years of business.

‘As Australia’s first bank, and the country’s first company, Westpac has seen many economic highs and lows. We attribute our success to being there for customers during good times and bad.

‘As we enter our third century of business, and with commodity prices affecting the PNG economy, it is a reminder of the need to be adaptable and set up to meet the market.’

Pawson says Westpac groups its Pacific operations with South Asia. ‘Our customers appreciate this, as they look to that region for trade and new markets.’

ANZ is taking a very different approach to other banks in the region. Mark Baker, ANZ’s Managing Director in PNG, says it has been concluded that the PNG business, should be ‘treated differently, rather than included only as part of the Pacific, which has been the traditional approach’.

Baker says the reason for the new approach is the size and complexity of the bank’s PNG business.

‘We are a big business—and a business that, when you look five or ten or twenty years out, will be significantly different again, driven by the changes that will occur in the PNG economy as a whole.

‘We asked: “So what does a business like PNG really need to be able to improve its proposition to our customers?”‘

‘The view was taken that PNG needed to be dealt with differently than had been the case in the past. So we’ve taken ANZ PNG out of the Pacific from a reporting line point of view, and moved it into the ANZ Institutional bank.

‘From there, you have really two choices about where you report to. You can report either into our International business in Asia or into our home market, Australia.

‘When we sat down and looked at it we asked: “So what does a business like PNG really need to be able to improve its proposition to our customers?” We saw that fundamentally, any business in PNG needs support around People, Process and Systems.

‘Those are the three things that you really have to get right to make businesses function well. Whatever you can do to improve those, that’s where you’re going to really get an uplift in your performance.

‘So the view was taken that, in terms of getting that kind of support—people support, process support and systems support—we were better off within the Institutional bank and reporting into Australia rather than into Asia.’

‘The people linkages between PNG and Australia are obviously very deep and strong at multiple levels. The closer we can match our processes and systems to those in our home market the better the service we can provide to our customers in PNG.’

Opinion: What Papua New Guinea must do to achieve digital financial inclusion