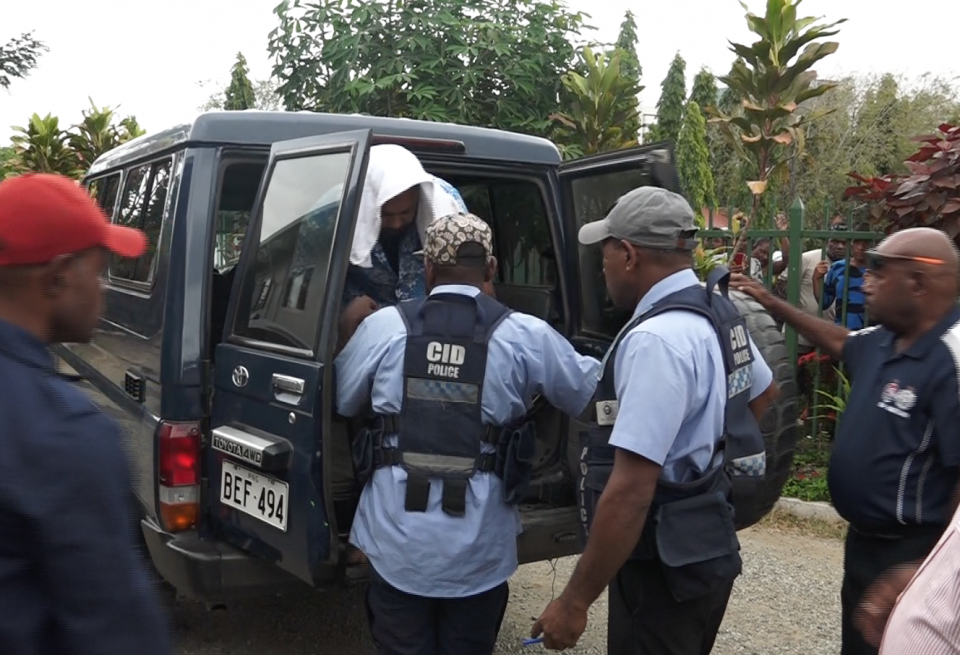 The main suspect in the gruesome murder of Jenelyn Kennedy was heavily escorted by CID officers to the Waigani Committal Court this morning.

The 28-year-old has been charged with wilful murder.

Suspect, Bhosip Kaiwi arrived at the Committal Court this morning for his first mention to a vast and anxious crowd waiting outside packed with families and many from the public following the case.

Heavily escorted by CID officers into the court holding area, Kaiwi had his face concealed with a white cloth; the face that many have been waiting to see since the death of the young Jenelyn.

Kaiwi’s appearance in the courtroom, packed with members of the Late Jenelyn family seemed tense. The noisy crowd outside the courtroom did little to mitigate the tension that the magistrate had to delay start for a few minutes to have the crowd outside moved further away from the courtroom to let proceedings take its course.

Court went into session after Kaiwi stood to have his charges read out to him by the magistrate Ganai. Two submissions were made by a lawyer representing Kaiwi. The first asking the court to have Kaiwi remanded back at the Boroko police cells and not up at the Bomana correctional facility citing security reasons and the second was to have the court issue an order to media and social media users to stop the widespread information given the sensitivity of the case.

All to which, magistrate Ganai responded stating that once charges have been laid, the process would be that the defendant is transferred up to the correctional facility and arrangements can be made then with the police and or the correctional service should the lawyer feels the defendant’s safety is at risk.

Further expounding on the second request by Kaiwi’s lawyer that the court has no control over social media let alone the mainstream media and should the defendant be affected by any report, there are laws in place to deal with this matter separately.

The magistrate issuing a remand warrant shortly after and Kaiwi’s case was adjourned to the 30th of July 2020.

It is between now and then that the Police prosecutor will be required to build and provide an updated status on the case investigations before Kaiwi’s next mention on the 30th of July 2020.

Meanwhile, EMTV confirms, Kaiwi is back at the Boroko police cells awaiting his remand warrant and is expected to be moved up to the Bomana Correctional Service facility tomorrow morning.

Teacher and Family Brutalized By Police