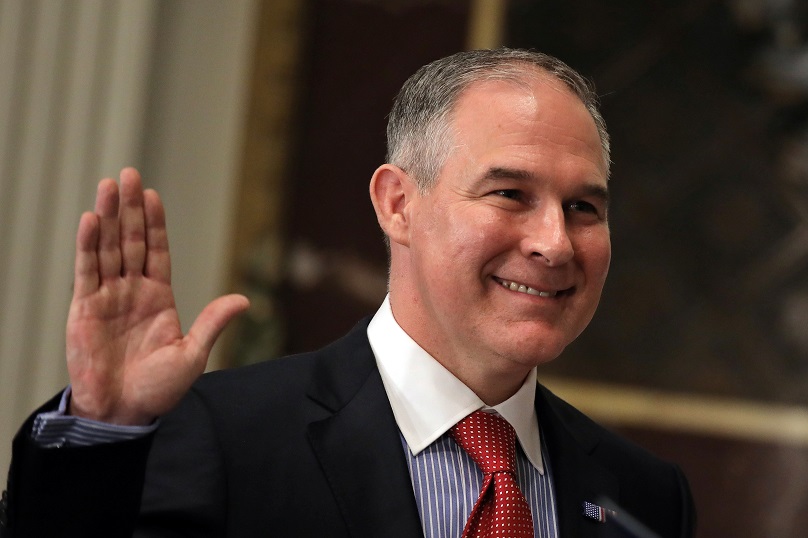 Image: The Senate confirmed Scott Pruitt to run the Environmental Protection Agency over the objections of Democrats and environmentalists worried he will gut the agency, as the administration readies executive orders to ease regulation on drillers and miners.

By Doina Chiacu and Valerie Volcovici

WASHINGTON (Reuters) – The new head of the Environmental Protection Agency said on Thursday he is not convinced that carbon dioxide from human activity is the main driver of climate change and said he wants Congress to weigh in on whether CO2 is a harmful pollutant that should be regulated.

In an interview with CNBC, EPA Administrator Scott Pruitt said the Trump administration will make an announcement on fuel efficiency standards for cars “very soon,” stressing that he and President Donald Trump believe current standards were rushed through.

Pruitt, 48, is a climate change denier who sued the agency he now leads more than a dozen times as Oklahoma’s attorney general. He said he was not convinced that carbon dioxide pollution from burning fossil fuels like oil, gas and coal is the main cause of climate change, a conclusion widely embraced by scientists.

“I think that measuring with precision human activity on the climate is something very challenging to do and there’s tremendous disagreement about the degree of impact,” he told CNBC.

“So no, I would not agree that it’s a primary contributor to the global warming that we see,” Pruitt said. “But we don’t know that yet, we need to continue to debate, continue the review and analysis.”

Trump campaigned on a promise to roll back environmental regulations ushered in by former President Barack Obama, including those aimed at combating climate change. He framed his stand as aimed at boosting U.S. businesses, including the oil and gas drilling and coal mining industries.

“We can be pro-growth, pro-jobs and pro-environment,” Pruitt said Wednesday afternoon in a Houston speech at CERAWeek, the world’s largest gathering of energy executives.

“We can’t afford to reject this clear and compelling scientific evidence when we make public policy. Embracing ignorance is not an option,” Ben Santer, climate researcher at Lawrence Livermore National Laboratory, said in a statement.

The Supreme Court unleashed a fury of regulation and litigation when it ruled in 2007 that greenhouse gases are an air pollutant that can be regulated under the Clean Air Act. Two years later, the EPA declared carbon dioxide and five other heat-trapping gases to be pollutants.

Pruitt said the Supreme Court’s decision should not have been viewed as permission for the EPA to regulate carbon dioxide emissions.

“Decisions were made at the executive branch level that didn’t respect the rule of law,” Pruitt said in his Houston speech.

Pruitt has previously said the EPA should not regulate CO2 without a law passed by Congress authorizing it to do so. The Republican-controlled Congress could potentially issue a strong signal to the EPA that carbon dioxide should not be regulated by the agency, a move that would undermine many Obama-era rules aimed at curbing emissions.

“Administrator Pruitt is correct, the Congress has never explicitly given the EPA the authority to regulate carbon dioxide as a pollutant and the committee has no plans to do so,” said Mike Danylak, spokesman for the Senate Environment and Public Works Committee, the panel that oversees the EPA.

When asked at his confirmation hearing in January whether he would uphold the EPA endangerment finding, Pruitt said it was the “law of the land” and he was obliged to uphold it for now.

Pruitt declined to respond to a question from a reporter after his Houston speech on whether he would now seek to overturn the endangerment finding.

“The mask is off. After obscuring his true views during his Senate confirmation hearings, Scott Pruitt has outed himself as a pure climate denier,” said David Doniger, director of the climate program at the Natural Resources Defense Council.

The new EPA chief said he was committed to ensuring thorough processes for environmental rules and regulations to reduce “regulatory uncertainty.”

Pruitt added that he shared Trump’s view that the global climate accord agreed by nearly 200 countries in Paris in 2015 was a “bad deal.” Trump promised during his campaign for the White House to pull the United States out of the accord, but has since been mostly quiet on the issue.