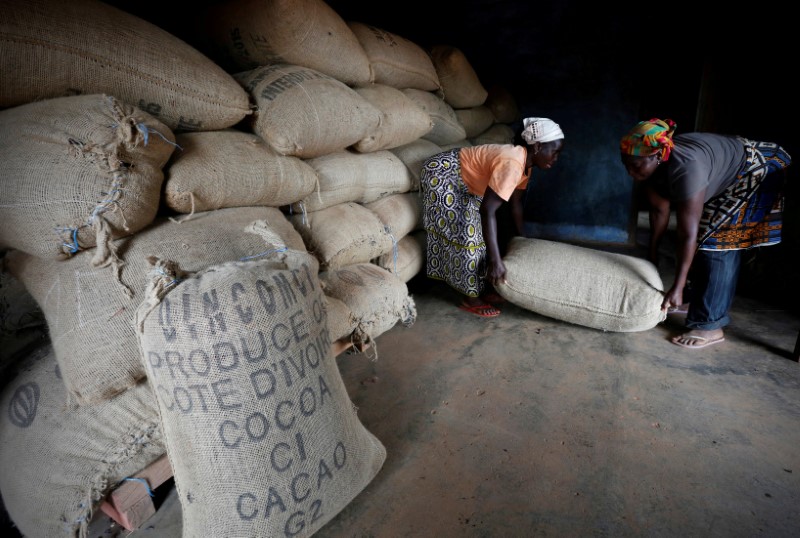 ABIDJAN (Reuters) – Dry weather and strong heat in some of Ivory Coast’s main cocoa growing regions are raising concerns about the size and quality of the upcoming cocoa mid-crop, farmers said on Monday, following forecasts for record production.

The dry season in the world’s top cocoa producer stretches from mid-November to March and it is normally very hot in February and March. Exporters and pod counters have predicted record production of nearly 2 million tonnes this season due to good weather.

Farmers reported good growing conditions last week in the southern regions of Aboisso and Agboville, the coastal region of Sassandra and the western region of Soubre, but in other areas more rain was needed, they said.

In the center-western region of Daloa, which accounts for about a quarter of national output, farmers reported scattered rain and strong heat last week.

“We need more rain so that the beans are of good quality in the coming months,” said Albert N’Zue, who farms in the outskirts of Daloa.

“The heat is very strong and is reducing soil moisture.”

In the eastern region of Abengourou, known for the quality of its beans, farmers said cocoa leaves and flowers had dried out.

“It’s a drought here. The trees are not doing well and there is practically no fruit on the plantations,” said Lambert Aka, who farms near Abengourou, adding that if it rained soon they could hope to have beans on the trees from June onwards.

Farmers in other regions said cocoa trees had plenty of flowers and small pods but that the crop could suffer if there was not more rain this month.

“We’re waiting to see (what will happen) because it hasn’t rained and the heat is strong,” said Honore Dongo, who farms in the southern region of Divo.

“If it doesn’t rain before the end of the month and it remains hot, we will have losses,” Dongo said.

In Soubre, at the heart of the cocoa belt, farmers reported two heavy bouts of rain that would boost the mid-crop.

“We think we are on the right track to have a good mid-crop if the rain doesn’t leave us,” said Lazare Ake, who farms in the outskirts of Soubre.

Few beans are left on the trees from the main crop and the mid-crop harvest should begin in mid-April, Ake said.

U.S., other countries call for urgent action on steel overcapacity