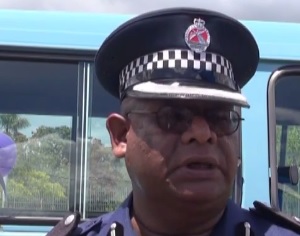 Central Provincial Police Commander Laimo Asi says there was high rate of absenteeism from policemen and women in Central throughout this year’s police operations.

He said there were reports of officers engaging in other activities like driving PMV buses and taking bribes of from locals.

Ill-disciplinary behaviour within the police force is a worrying concern for police superiors. This year, the police department fell under public criticism for abusing police uniforms, misusing government vehicles and cases of police brutality.

At the launch of the police operations for the festive season for Central Police today, the Central PPC Laimo Asi warned his officers to refrain from engaging in other activities and concentrate on policing their communities. Festive operations will run until January next year, with funding of K130,000 from the Central government.

A new ten seater vehicle was also donated to Kwikila Police Station. This donation makes the first time in 15 years since a police station in Central has received a vehicle from the police department.
With this donation, the PPC has discouraged his men from hiring vehicles for police operations, saying it is a waste of the department’s money.

Three more police vehicles will be given to Central Province before the year ends.

Churches Call For A Review On Asylum Deal

Shortage of blood in The Western Highlands Province