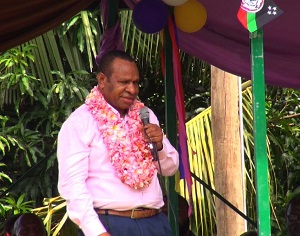 Outgoing Opposition Leader, Belden Namah has again brought up his disappointment at the way Kandep MP, Don Polye took over the Oppositions seat.

Speaking yesterday at the commissioning of the Kambiu LLG Rural Electrification Program, Namah told people gathered at the ceremony that he is still the Opposition leader.

“After I welcomed him (Don Polye), he decided to hold a caucus without me,” said Namah.

He said the police are servants of the state and they should provide security to a leader mandated by the people.

“I am not happy with what happened; he (Belden Namah) is a leader mandated by the people,” said Marat. It’s understood that the East New Britain Governor called it on the grounds that Namah was no longer Opposition leader.