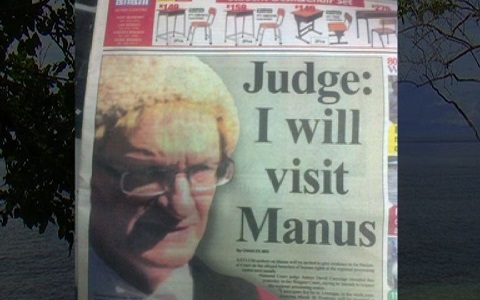 As the debate on keeping asylum seekers on Manus continues, Transparency International PNG (TI PNG) has been questioning the right of PNG to import people against their will and to lock them up when they have not broken our laws.

The statement was made by Chairman of Transparency International PNG, Lawrence Stephens in a media release.

The stance by TI PNG comes after National Court Judge David Cannings revealed he would be inspecting the regional processing centre next month.

TI believes the decision by the court gives hope to people who are concerned that basic laws and principles are being blatantly ignored.

TI PNG is concerned about suggestions that PNG’s sovereignty has been compromised, that our officials appear to be taking instructions from an international security company and that we have failed to ensure the safety of the refugees.

They conveyed condolences to the family of the Iranian man who lost his life.

The church leaders say Asylum seekers are human beings who deserve respect and recognition of their dignity.

Detaining people against their will in PNG, even if it “works” as a deterrent is not a just solution worthy of a great nation.

They are calling for the centre to be closed and for the problem to be managed on Australian soil.