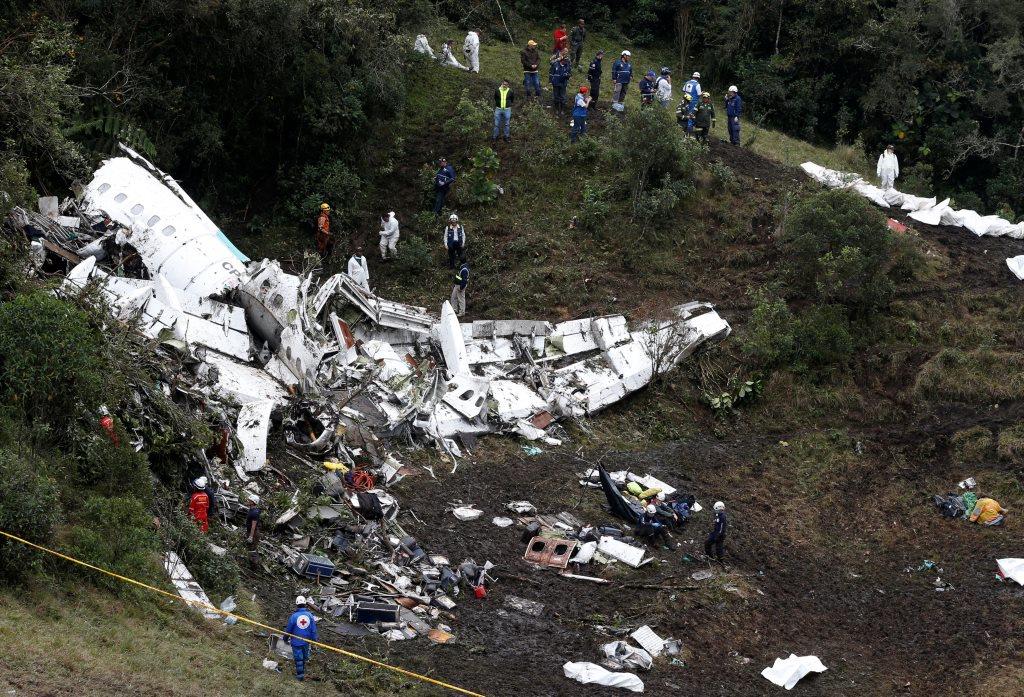 Image: Rescue crew work at the wreckage of a plane that crashed into the Colombian jungle with Brazilian soccer team Chapecoense onboard near Medellin, Colombia, November 29, 2016.

Colombia’s worst air disaster in two decades killed all but five people as the team flew to face Atletico Nacional of Medellin in the first leg of the Copa Sudamericana final, South America’s equivalent of the Europa League.

Global football was stunned with tributes pouring in from major figures including Pele, Lionel Messi and Wayne Rooney.

The BAe 146 charter plane, en route from Bolivia where the team had a stopover, went down about 10:15 p.m. on Monday night with 68 passengers and a crew of nine on board. Officials originally said 75 people were killed. 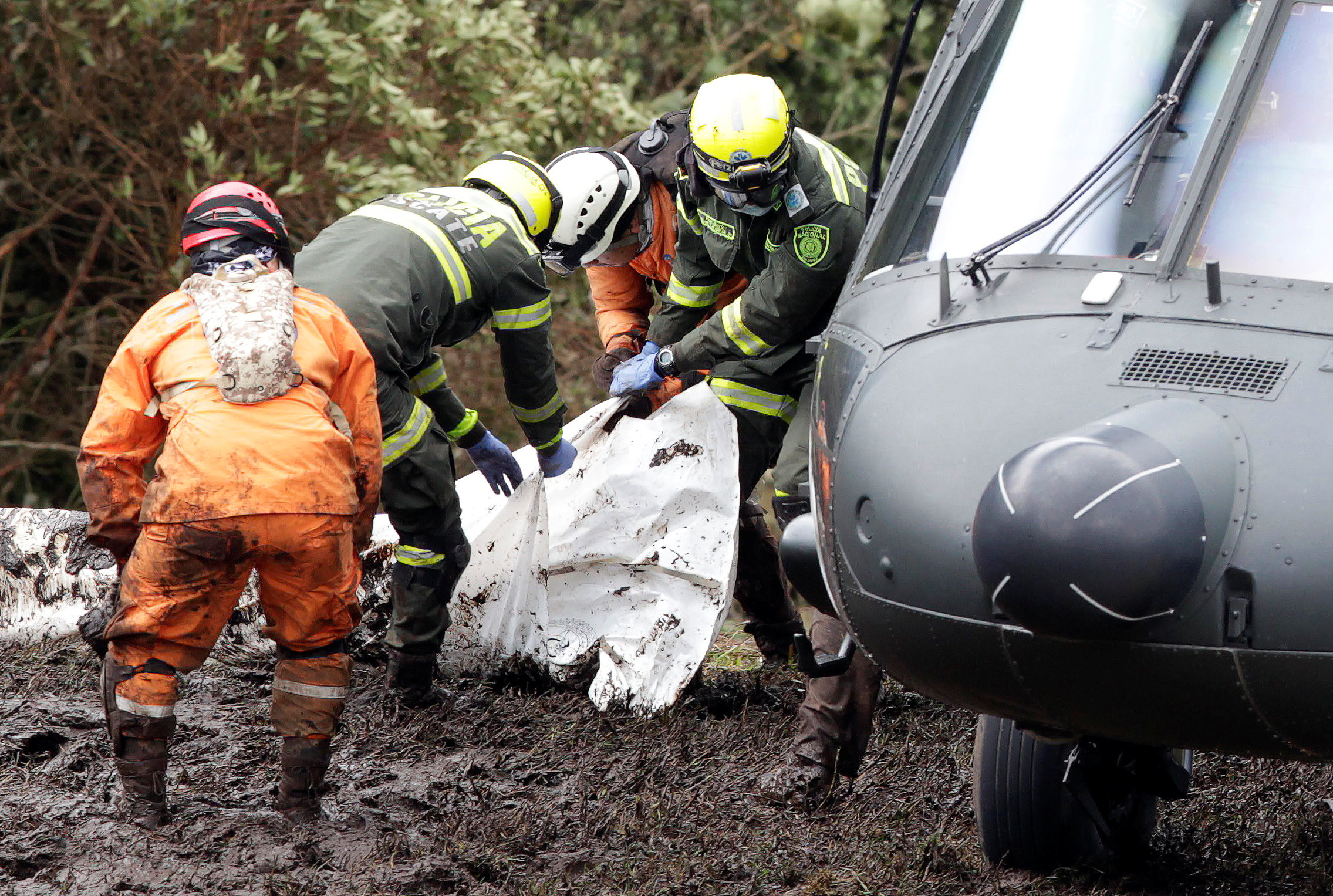 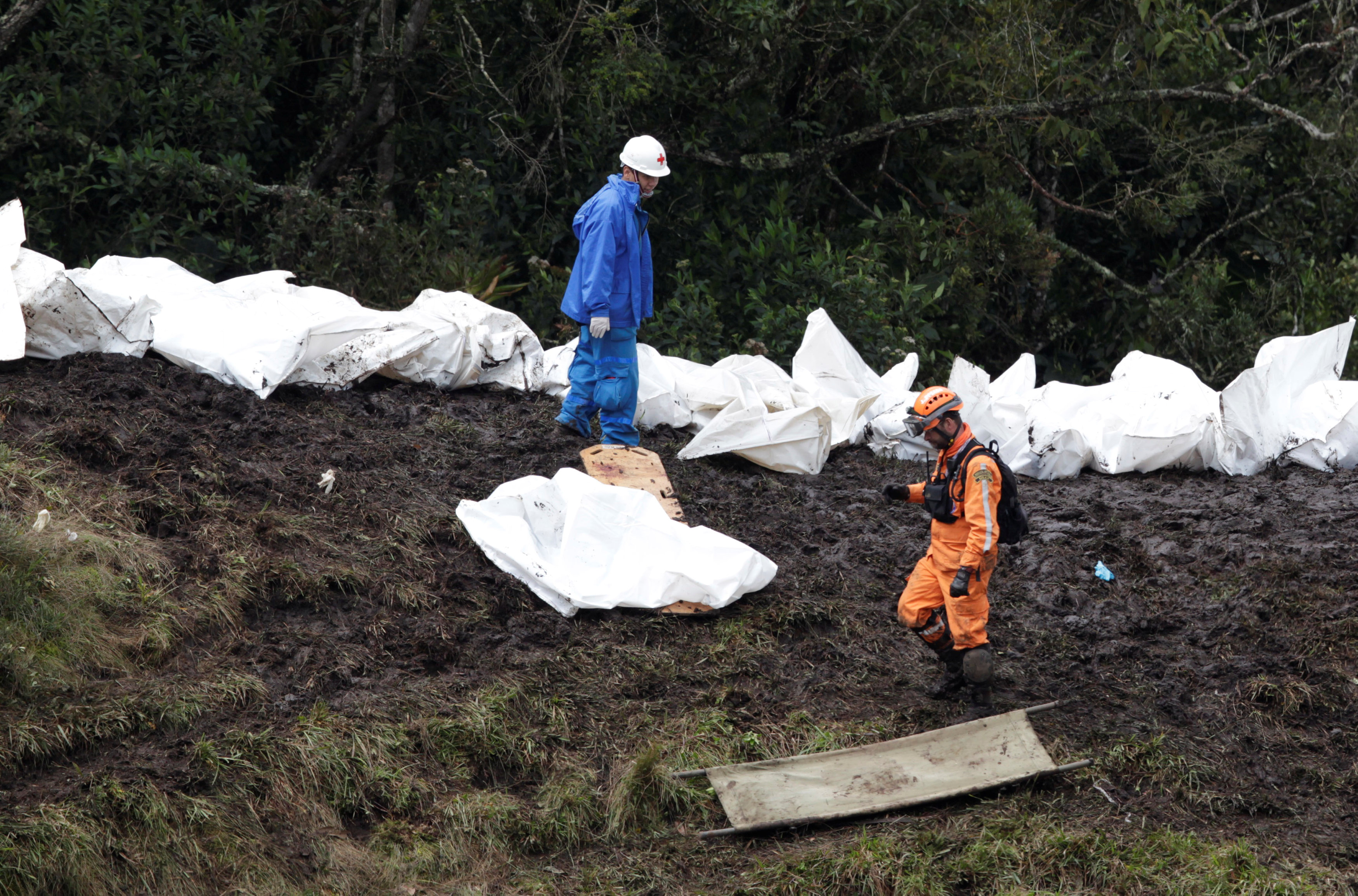 The aircraft had reported electrical problems and declared an emergency minutes earlier as it neared its destination, Medellin airport officials said.

At the crash scene near the town of La Union in wooded highlands outside Medellin, dozens of bodies were laid out and covered with sheets around the wreckage.

The plane was shattered against a mountainside with the tail end virtually disintegrated. Rain hampered dozens of rescuers as they combed the muddy and forested area.

In addition to players, coaches and staff, 21 journalists had been on board the plane to cover the match, Brazilian news organizations said.

It was the first time Chapecoense, a small club from the southern town of Chapeco which has had a fairy-tale rise since 2009 from Brazil’s fourth to top division, had reached the final of a major South American club competition.

Matches were cancelled around South America, and Brazil declared three days of mourning. Atletico Nacional asked for Chapecoense to be awarded the trophy in honour of those who died.

Brazil’s fellow top division teams offered to loan players to Chapecoense for next season and also asked the Brazilian Football Confederation (CBF) to give the club a three-year exemption from relegation.

“They were the hope of our city,” said Jean Panegalli, 17, a student in Chapeco, where fans were disconsolate. “They played for love of the shirt and not for money. They played with the commitment that only those who have lived here know.”

The BAe 146 was produced by a company that is now part of the UK’s BAE Systems <BAES.L>.

The team took a regular flight to Santa Cruz in Bolivia and then went from there to Medellin on the plane run by a Bolivian-based company called LAMIA with roots in Venezuela.

By early afternoon, rescuers had recovered 69 bodies, which were to be flown out by helicopter for identification and then repatriation. Two bodies remained at the scene.

“The weather is hampering efforts but we hope conditions will improve during the day,” said local fire official Misael Cadavid. “It’s a very rough topographical area and penetration is not easy.”

The mayor of Chapecó, Brazilian aviation disaster experts, police and health officials, and football federation leaders were on their way to Medellin on a Brazilian Air Force plane, said a spokesman for Brazil’s president.

Representatives of Globo TV and Fox Sports TV, the media with the most journalists on board, were also on the Air Force plane to help identify their journalists, he added. Two military planes will follow at a later date to fly the bodies home.

The crash evoked memories of a series of football air disasters in the 20th century, including the Munich crash in 1958 that killed 23 people, among them eight Manchester United players, journalists and travelling officials.

“TOWN COME TO A STOP”

Chapecoense, who qualified for the final after overcoming Argentine club San Lorenzo, were underdogs for the match against the Colombian club going for a rare double after winning the Copa Libertadores in July.

Brazil’s 21st biggest club by revenue, it has built success on a frugal spending policy that eschewed big-money signings and concentrated on blending young talent and experienced journeymen.

Several hundred dejected fans gathered around the team’s Conda stadium in Chapeco, many of them wearing Chapecoense’s green strip.

“It is still hard to believe what has happened to the Chapecoense team just when it was on the rise,” said Agenor Danieli, 64, a pensioner in the agricultural town of about 200,000 people in Santa Catarina state.

“We are in crisis. The town has come to a stop. Companies are giving people the day off so they can come here to the stadium. We need to pray. It still doesn’t feel real.”

Chapecoense’s best-known player was Cleber Santana, a midfielder whose best years were spent in Spain with Atletico Madrid and Mallorca. Coach Caio Junior also was experienced, having managed at some of Brazil’s biggest clubs, Botafogo, Flamengo and Palmeiras among them.

The crash prompted an outpouring of solidarity and grief on social media from the football community, with Brazilian top flight teams Flamengo and Santos tweeting messages of support.

The South American football federation suspended all games and other activities following the crash.

It was Colombia’s worst air accident since more than 160 people died on an American Airlines plane in 1995 in a mountainous area near Cali.

“The crew had their licenses in order, everything was in order for the flight,” DGAC head Cesar Varela told journalists.

The nine crew members, including the pilots, were Bolivian.