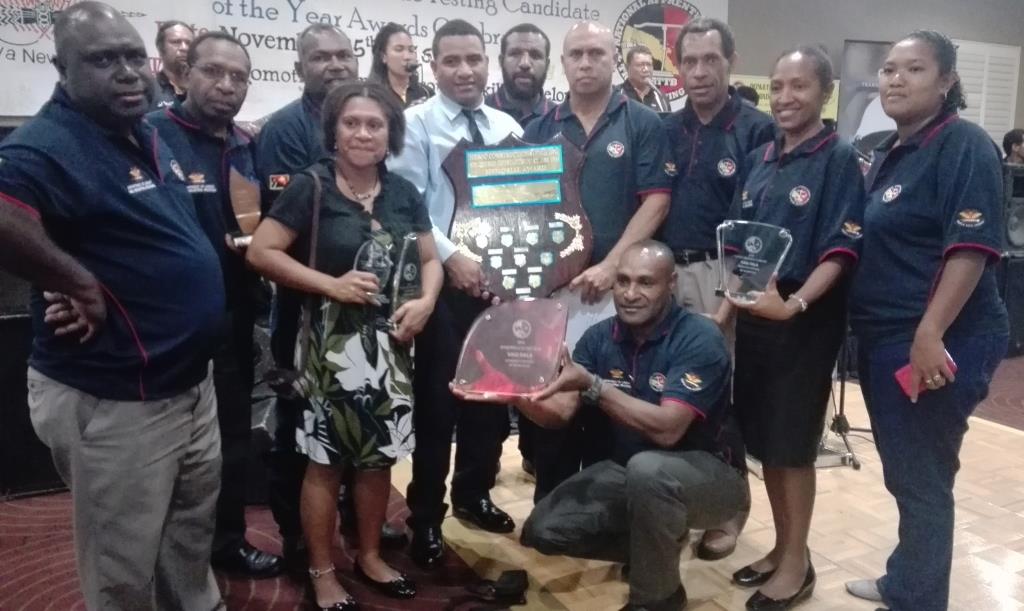 Mr. Oala was selected ahead of 7 other contestants from industrial, mining and petroleum companies to claim the honour of becoming the top apprentice at the awards night on Friday November 25, in Port Moresby.

Mr Oala also received the 2016 National Apprentice Trade Testing Board (NATTB) Chairman’s award and the 2016 Best Tradesperson-of-the-Year award.
The 25-year-old from Pari village in Central province was also OTML’s Apprentice of the Year after his project Automatic Metal Extraction Process on Conveyors was judged as the winning project and was selected to represent OTML.

Reirei Yari a final year Business Studies trainee attached to the Human Resource department was OTML’s other contesting candidate and she received the 2nd runner-up Trade Testing Candidate of the Year award.

Her presentation, ‘Effective Communication’ in the Workplace was judged as the winner during an internal OTML competition in September, enabling her to compete under the Trade Test Candidate category at the national level.

Twenty-four-yea-old Ms Yari from Buseki village in Lake Murray, Western province said it was an honour to represent OTML at the NATTB awards.

“It was a tough challenge competing against the other contestants in different trades, under the trade testing category.”

“I thank OTML management team, who believed in me to compete in the NATTB competition, thank you also to Human Resource, Learning and Development team for supporting and mentoring me,” Ms Yari said.

Musje Werror, OTML Deputy CEO and General Manager Employee and External Relations, who was given the honour of presenting the award to Mr Oala at the awards night, said it was a special night for OTML.

“We are all very proud of the achievements of Mr. Oala and Ms Yari who both had very little time to prepare after the seven months of suspension of operations and the resumption of production on 1st March,” Mr Werror said.

“The last 8 months has been a challenge for OTML to get back to normal operations after the long shutdown and to have one of our apprentice achieve the top award is a remarkable achievement. It will definitely go down as one of the highlights in 2016 for the company; and it will strengthen our commitment to train nationals and contribute towards PNG’s human resource development,” he added.

Peter Graham, OTML Managing Director and CEO, who was unable to attend the awards night, said it was a significant achievement for Mr Oala and OTML.

“I presume the dry weather resulted in a disruption to the regular training schedule and adjustments had to be made to the program. Vagi obviously took this in his stride, another indication of his commitment to his professionalism,” Mr Graham said.

Last year, OTML did not participate in the competition due to the suspension of operations; and it was a blessing in disguise when Mr Oala won the award as it reflects OTML’s strong commitment to support and train young Papua New Guineans in industrial trades.

In 2014 an OTML Final-year Electronics female apprentice, Bazu Haung won the Apprentice-of-the-Year award making her just the second female from OTML to win the award.

The first OTML female apprentice to win the award was Serah Tito in 2004.

According to OTML’s Superintendent for Learning and Development, Morris Nandun, OTML has trained 938 apprentice trainees since 1982.

Mr Nandun said current apprentice trainees in training with OTML is 119 (including 2nd, 3rd and 4th-year trainees) while there are 56 trainees in year 4; comprising 44 males and 12 females.

“It’s a positive outcome for OTML and all those involved in preparing the trainees, considering the limited time, we had to prepare for the event.”

“Thank you to everyone at OTML and NATTB who assisted to make this happen. It’s a success story for OTML in these economically challenging times,” Mr Nandun said.

Other companies who had their apprentices competing were Ela Motors, UMW, and Hastings Deering Limited.

No Arrests In Hanuabada Shooting Yet

Marape: All Is Well With PNG Economy