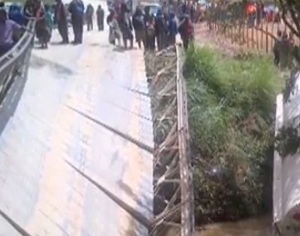 The people of Nipa District in the Southern Highlands Province have raised concerns over the hefty fees imposed by local landowners.

Since the collapse of the Nipa Bridge last month, the landowners have constructed a by-pass and collected fees for every cross–over.

A team from the National Works Department visited the affected area and discussed ways to reconstruct the bridge.

The Works Team was led by department secretary David Wereh. Together with the Member for Nipa –Kutubu Jeffrey Komal, he met with landowners of Nipa Station, particularly the affected area of the bridge where the oil tanker overturned.

The discussions centred on the people’s compensation demand of about K3 million for damages to the environment due to the oil spill, among others.

However, EM TV understands that the people’s demands are yet to be met by the government. As a result, the people have refused to allow the Works Team to fix the bridge. But from the meeting with all stakeholders, Secretary Wereh has called on the people to allow his men to progress with work, and allow the free flow of traffic.

There are two groups of people, those whose land have been affected by the oil spill, and those feeling the impact now that the bridge and road network has been cut-off. What’s worse is that for every cross-over, the people are forced to pay K200 or more. PMV drivers are also charged K200 per head, and it’s expensive not only for the people but for vehicles belonging to the PNG LNG project that frequent this road.

Thousands of people near Nipa Station were cut-off following the collapse of the bridge at Uripa, near Nipa station. The bridge collapsed when a fuel tanker, owned by an oil and grease company, over turned. The collapsed bridge has affected the people in Hela and Nipa-Kutubu, as well as operations of other major oil and gas field, including Hides gas.

Manus: Lorengau Market to be Renovated