National airline Air Niugini is helping establish Jacksons International Airport as a regional hub, according to the company’s Chairman, Sir Frederick Reiher. He told the Business Advantage Papua New Guinea Investment Conference that the choice of new routes to China were made with that strategy in mind. 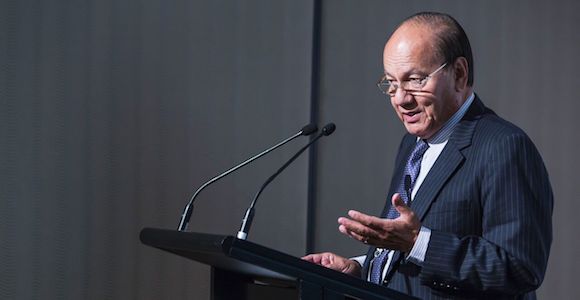 Reiher said Shanghai was chosen as a new destination because it offered the best opportunity for Air Niugini to meet the needs of business passengers and tourists.

‘That assessment looked at the unique opportunity to have Port Moresby as a “hub” for travellers to and from China from the Pacific Islands, particularly Melanesia and Micronesia, and North Queensland.

‘We are seeing a large increase in the number of passengers connecting between the Pacific Islands and Asia.’

‘While our “hub” project targets major airports, as I have mentioned, it will also play a very useful role in providing links for the distant island nations of Melanesia and, increasingly, Micronesia.’

Reiher said the development of Port Moresby as a hub remains a ‘work in progress’ but he believes the signs are positive.

‘Papua New Guinea can develop a unique tourism industry, one that will really boost our SME business sectors and employment.’

Reiher said for the strategy to be effective, the ‘whole industry’ would have to work together: airlines, ground transport, accommodation providers, resorts, government and community leaders, and other stakeholders such as travel agents.

‘Papua New Guinea can develop a unique tourism industry, one that will really boost our SME business sectors and employment.

‘As the hub develops, and obstacles such as visa requirements and infrastructure, are overcome, I am confident it will be a significant partner in the development of our tourism and travel sectors.

Chongqing in China, a city with a population of 30 million

‘To meet our growing regional and international services, as well as strengthening our main domestic routes, all benefiting from a modern national airport.’

He added that Air Niugini is undertaking the ‘largest fleet replacement and upgrading program in our history.’

‘Going out has only just begun. With the One Belt One Road initiative, China intends to build in the part of the world that has to some extent missed out on globalisation’ he says.

‘They will be taking trade routes from the South Pacific all the way to Europe and even to the UK.’

‘In spite of perceptions of low liveability, Port Moresby can capitalise on its relatively superior infrastructure vis-à-vis rest of PNG and Pacific islands.’

He points to some major shifts in investment occurring in the region. These suggest that Air Niugini’s strategy is well aligned with current trends.

Displaced Residents Concerned about their Welfare