The Papua New Guinea economy is unlikely to rebound strongly before 2020, according to a report by the World Bank. It forecasts steady, but unspectacular, growth. 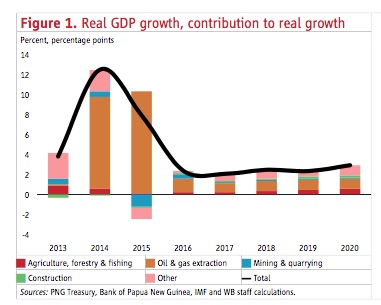 The World Bank’s forecasts GDP growth of 2.1 per cent for this year, 2.5 per cent for next year and 2.4 for 2019. This puts the country at the lower end in the Asia Pacific region.

‘At least till 2020, growth in the resource sector is expected to remain subdued reflecting the low commodity-price environment coupled with the lack of any new resource projects expected before then.

‘In the non-resource sector, growth is expected to remain moderate due to the expected on-going shortage of foreign exchange and continued fiscal consolidation.

‘The Government will have difficulty maintaining macroeconomic stability.’

In the medium to longer-term, the World Bank’s outlook for growth is more positive because of an expectation of more resource projects coming on stream.

GDP growth is ‘expected to edge towards trend in the longer term, which is estimated at 4 percent.’

The World Bank analysis suggests there will be little easing of the pressure on the National Government.

The report says the Government will need to maintain macroeconomic stability and a prudent fiscal stance. Public service delivery, particularly with infrastructure, will be a challenge in the face of limited revenue receipts.

It points to a growing risk that the longer the foreign exchange shortages continue, the more likely it is that ‘a more active shadow FX market may emerge’.

Ensuring that government expenditure is efficient will need to be the focus, argues the report.

‘The cash flow shortage in the public sector, coupled with the shortage of foreign currency, has contributed to fewer construction projects completed.’

‘Employment in the non-resource sector contracted by 2.5 percent.’

The World Bank notes that PNG’s challenges also exist elsewhere in the region.

‘In a number of countries—including Papua New Guinea, the Solomon Islands, and Vanuatu—failure to improve the efficiency of public spending would likely mean that the human development targets would remain well out of reach. ‘ 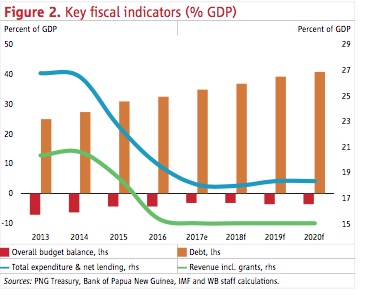 The report makes a number of comments about PNG economic indicators. It says that the borrowing of the non-financial private sector from domestic commercial banks is at the low end in the region—about 20 percent of GDP compared with more than 150 percent of GDP in China.

Employment in the non-resource sector contracted by 2.5 percent through-the-year to March quarter 2017, according to the Bank.

Non-resource employment contracted in a number of sectors including building and construction (down 13.6 per cent), transport (down 10.0 per cent), retail (down 5.6 per cent), wholesale (down 3.1 percent), and finance and other services (down 1.3 percent).

On the other hand, the manufacturing sector and the agriculture, forestry and forestry sector recorded growth in employment by 1.9 per cent and 0.6 per cent respectively.

‘The surplus in the current account is largely offset by financial account outflows due to a build-up in foreign currency account balances of resident mineral companies, coupled with net loan repayments by the government.’

The report forecasts a deterioration of PNG’s debt position. Government debt-to-GDP is projected to increase to 35 per cent of GDP, up from 32.2 per cent in 2016.’

Fight Breaks Out At UPNG