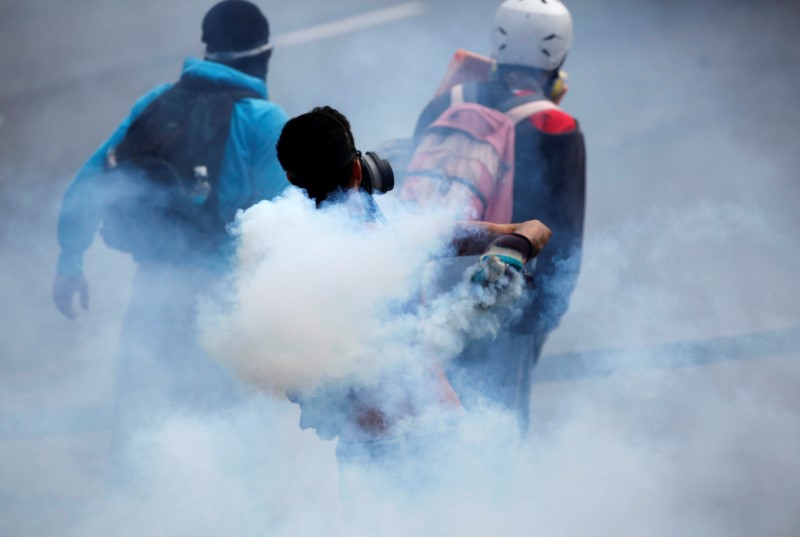 By Patricia Zengerle and Matt Spetalnick

WASHINGTON (Reuters) – The Trump administration imposed sanctions on the chief judge and seven other members of Venezuela’s Supreme Court on Thursday as punishment for seizing powers from the opposition-led Congress earlier this year, U.S. officials said.

The new sanctions package was aimed at stepping up pressure on the leftist government of Venezuelan President Nicolas Maduro and his loyalists amid growing concern over a crackdown on street protests and his efforts to consolidate his rule over the South American oil-producing country.

Venezuela’s latest wave of anti-government unrest, which has left at least 44 people dead in the last six weeks, began with the Supreme Court, packed with Maduro supporters, assuming the authorities of the opposition-led Congress in late March.

There was an international outcry against the court’s de facto annulment of the National Assembly, which the opposition won in late 2015 during an unprecedented economic and social crisis, and the decision was later partially reversed.

“The Venezuelan people are suffering from a collapsing economy brought about by their government’s mismanagement and corruption. Members of the country’s Supreme Court of Justice have exacerbated the situation by consistently interfering with the legislative branch’s authority,” U.S Treasury Secretary Steven Mnuchin said in a statement.

“By imposing these targeted sanctions, the United States is supporting the Venezuelan people in their efforts to protect and advance democratic governance in their country,” he said.

Among those hit with sanctions was Maikel Moreno, a Maduro ally who became president of the 32-judge court in February. All of those targeted will have U.S. assets frozen and be denied travel to the United States, while American citizens will be barred from doing business with them, officials said.

Speaking in Washington alongside visiting President Juan Manuel Santos of Colombia, Venezuela’s neighbor, Trump called the humanitarian situation “a disgrace to humanity” and promised to help fix it, but he offered no new U.S. approach.

A senior U.S. official warned of further action against “bad actors” if there are no changes in the country. But sanctions so far have stopped short of hitting the oil sector in Venezuela, which is a major U.S. oil supplier.

Republican U.S. Senator Marco Rubio, who had pushed for further sanctions, called the measures a message “to Maduro and his thugs that their actions are not going to go unpunished.”

Hundreds of thousands of people have taken to the streets across Venezuela in protest against the Maduro’s government, demanding elections, freedom for jailed activists, foreign aid and autonomy for the opposition-led legislature.

Maduro’s aides accuse them of seeking a violent coup.

The Treasury Department has in the past sanctioned Venezuelan officials or former officials, charging them with trafficking or corruption. In February, the United States blacklisted Venezuelan Vice President Tareck El Aissami for alleged links to drug trafficking.

The officials have denied the charges and called them a pretext to try to topple Maduro’s government, something Washington has denied.

The U.S. government said the judges were being targeted because they had “usurped” democratic authority.

In March, the court stated it was assuming the Congress’ role in a ruling authorizing Maduro to create oil joint ventures without the previously mandated congressional approval.

The court claimed the National Assembly was in contempt over vote-buying accusations against three lawmakers. Even though they no longer sit in Congress, the court said opposition leaders had not handled their case legally.

Maduro’s critics say it was an excuse for him to consolidate power and muzzle the opposition.

Three IT students to represent PNG in Colombo