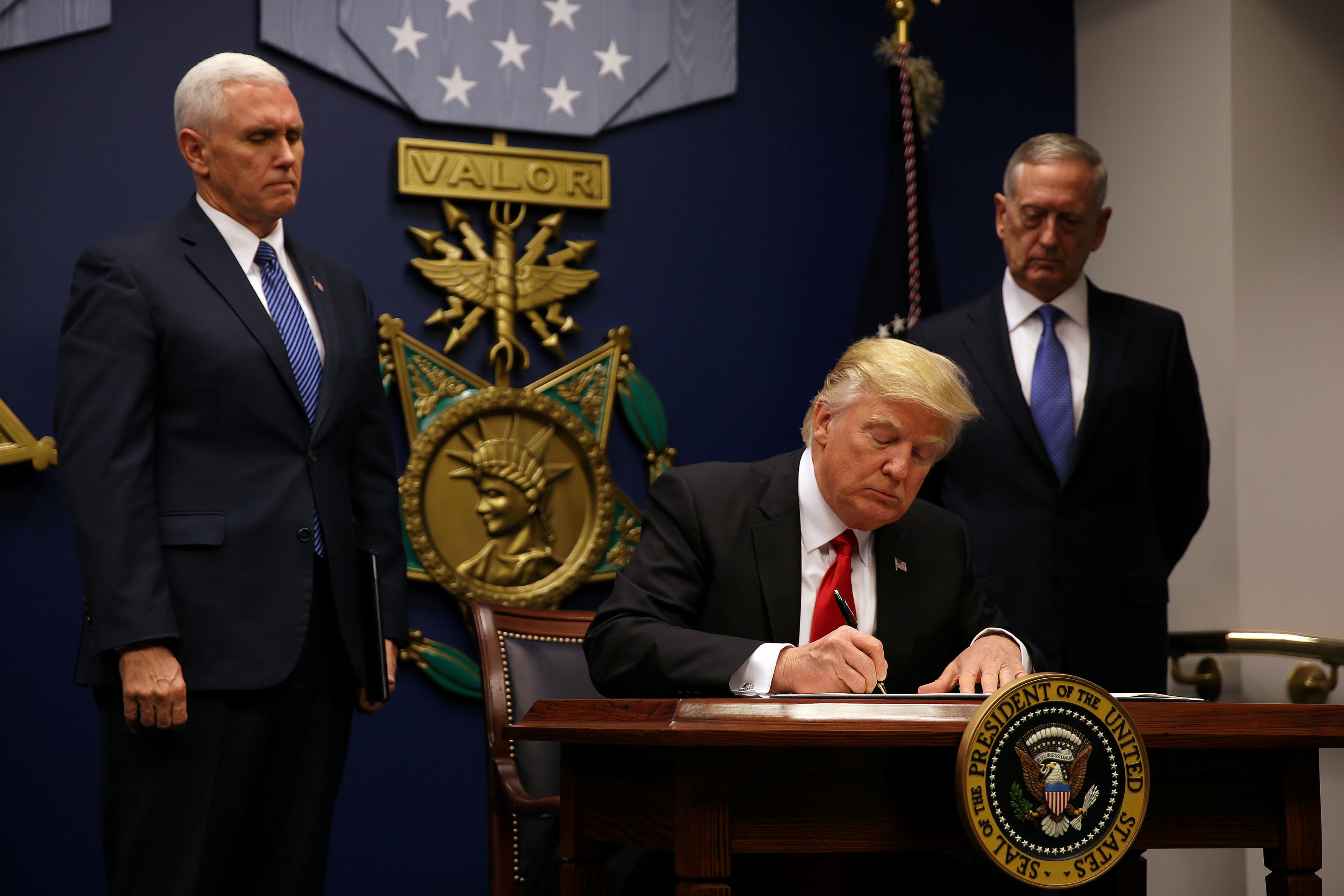 By Emily Stephenson and Mica Rosenberg

(Reuters) – President Donald Trump on Friday put a four-month hold on allowing refugees into the United States and temporarily barred visitors from Syria and six other Muslim-majority countries, saying the moves would help protect Americans from terrorist attacks.

The order limiting entry on visitors from Syria and six other Muslim-majority countries is for 90 days. The six other countries are: Iran, Iraq, Libya, Somalia, Sudan and Yemen, the White House said.

“I’m establishing new vetting measures to keep radical Islamic terrorists out of the United States of America. Don’t want them here,” Trump said earlier on Friday at the Pentagon.

“We only want to admit those into our country who will support our country and love deeply our people,” he said.

Civil rights groups condemned the measures as discriminatory, and said they would strand refugees in dangerous places and would tarnish the reputation of the United States as a land welcoming of immigrants.

The details of the order – which had been rumoured for days – were not available until Friday evening, leaving people affected scrambling to figure out what it meant.

The impact was immediate, causing “chaos” for Arab-Americans who had family members already en route for a visit, said Abed A. Ayoub, legal and policy director for the American-Arab Anti-Discrimination Committee.

Ayoub said the order could affect travelling green card holders, students, people coming to the United States for medical care and others.

The order is already affecting refugees and their families, said Jen Smyers of the Church World Service, a Protestant faith-based group that works with migrants.

Smyers said she spoke to an Iraqi mother whose twin daughters remain in Iraq due to processing delays. “Those two 18-year-old daughters won’t be able to join their mother in the U.S.,” she said.

Trump had promised the measures – called “extreme vetting” – during last year’s election campaign, saying they would prevent militants from entering the United States from abroad.

The rise of Islamic State in Syria and Iraq, which fuelled a flood of migrants into Europe, combined with a series of attacks in France and Belgium heightened concerns in the United States about taking in refugees from Syria.

Trump’s order suspends the Syrian refugee program until further notice, and will eventually give priority to minority religious groups fleeing persecution. Trump said in an interview with a Christian news outlet the exception would help Syrian Christians fleeing the civil war there.

Stephen Legomsky, a former chief counsel at U.S. Citizenship and Immigration Services in the Obama administration, said prioritising Christians could be unconstitutional.

“If they are thinking about an exception for Christians, in almost any other legal context discriminating in favour of one religion and against another religion could violate the constitution,” he said.

But Peter Spiro, a professor at Temple University Beasley School of Law, said Trump’s action would likely be constitutional because the president and Congress are allowed considerable deference when it comes to asylum decisions.

“It’s a completely plausible prioritisation, to the extent this group is actually being persecuted,” Spiro said.

Trump’s order had been expected to include a directive about setting up “safe zones” for Syrian refugees inside the country, but no such language was included.

“President Trump has cloaked what is a discriminatory ban against nationals of Muslim countries under the banner of national security,” said Greg Chen of the American Immigration Lawyers Association.