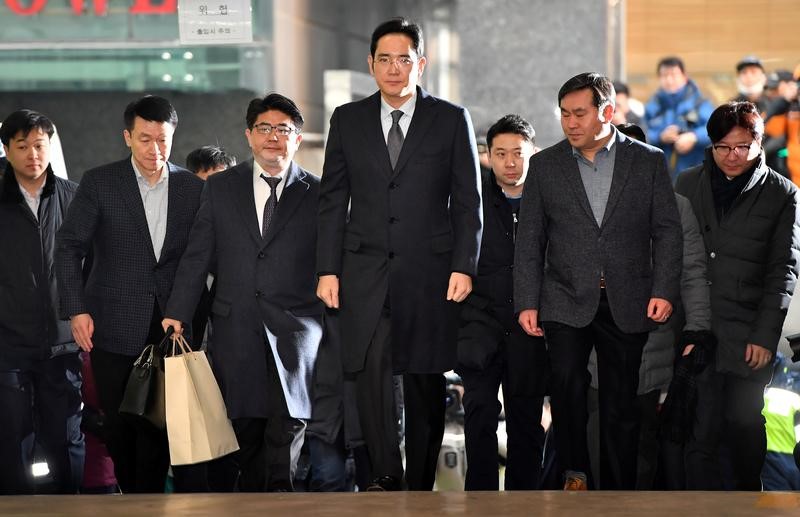 The 48-year-old Lee, vice chairman of Samsung Electronics Co Ltd, was taken into custody at the Seoul Detention Centre, where he had awaited the court’s decision following a day-long closed-door hearing that ended on Thursday evening.

The judge’s decision was announced at about 5:30 a.m. (2030 GMT) on Friday, more than 10 hours after Lee, the sprawling conglomerate’s third-generation leader, had left the court.

The same court rejected a request from prosecutors last month to arrest Lee. On Tuesday, the special prosecutor’s office had requested a warrant to arrest him and another executive, Samsung Electronics president Park Sang-jin, on bribery and other charges.

However, the court rejected the request to arrest Park, who also heads the Korea Equestrian Federation, saying it was not needed given his “position, the boundary of his authority and his actual role.”

The prosecution said it had secured additional evidence and brought more charges against Lee in the latest warrant request.

“We acknowledge the cause and necessity of the arrest,” a judge said in his ruling, citing the extra charges and evidence.

Samsung and Lee have denied wrongdoing in the case.

“We will do our best to ensure that the truth is revealed in future court proceedings,” the Samsung Group said in a brief statement after Lee’s arrest.

While Lee’s detention is not expected to hamper day-to-day operation of Samsung Group companies, which are run by professional managers, experts have said it could affect strategic decision-making by the country’s biggest conglomerate.

The Samsung Group, a key driver of Asia’s fourth-largest economy, has been engaged in a restructuring process as it clears a succession path for Lee to assume control after his father, Lee Kun-hee, was incapacitated by a 2014 heart attack.

“It is not like Samsung’s business will be grinding to a halt. There are many smart people at the company,” former Samsung Electronics executive Kim Yong-serk said recently.

However, Lee’s arrest would have an impact on longer-term investment decisions, said Kim, now a professor at Sungkyunkwan University.

“Samsung presidents are evaluated on an annual basis, so they cannot make bold bets about the future. They need a chairman when making long-term investment decisions,” he said.

The arrest gives a boost to prosecutors who have zeroed-in on Samsung Group to build their case against President Park and her close friend Choi Soon-sil, who is in detention and faces charges of abuse of power and attempted fraud.

Both Park and Choi have denied wrongdoing.

The office has focussed its investigations on Samsung’s relationship with Park, 65, who was impeached by parliament in December and has been stripped of her powers while the Constitutional Court decides whether to uphold her impeachment.

That funding includes Samsung’s sponsorship of the equestrian career of Choi’s daughter, who is in detention in Denmark, having been on a South Korean wanted list.

If the decision is upheld by the Constitutional Court, she will become South Korea’s first democratically elected leader to be forced from office early.

Park remains in office but stripped of her powers while the Constitutional Court decides whether to uphold her impeachment by parliament.

“This is a painful event for Vice Chairman Lee,” said Kim Sang-jo, a shareholder activist and economics professor at Hansung University who was questioned by the special prosecutor as a witness in the probe.

“But this will be an important opportunity for Samsung Group to sever ties with the past,” he said, referring to links between the government and the country’s conglomerates, also known as chaebol.