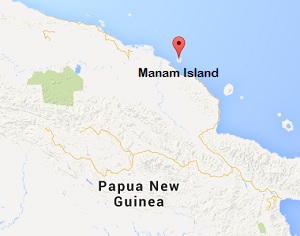 One decade after the Manam volcano erupted in Madang Province, the plan to relocate islanders is slowly taking shape.

These care centres are Mangem in Sumgilbar LLG and Asuramba and Potsdam in mainland Bogia. Until now, the Manam people have realised they cannot return to their island because of the continuous build up in volcanic activity.

One option they proposed many years back was for them to resettle on mainland Bogia. For many years, this idea has fallen on deaf ears. Yesterday, Madang Governor Jim Kas raised the proposal again and formally handed over the Manam Restoration Act to the government’s Chief Secretary, Sir Manasupe Zurenuoc.

Today, representatives of the Manam islanders, along with LLG presidents, members of the Madang Provincial Assembly and a representative of the proposed Andarum resettlement site commended the move.

Senior Manam spokesman Peter Muriki said the resettlement plan may take longer but he requested that the government address with immediate concern the displaced settlers and their host villages. The Andarum ward councillor said they accept the Manam islanders settling in their land but they have requested government aid.

Educationists: It’s too early to say OBE is ineffective