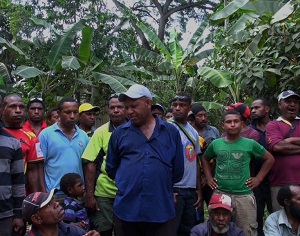 Relatives of a primary school teacher who was brutally murdered at Morata Settlement in Port Moresby are calling on the police to fast track the investigation.

Eye witnesses say the victim and his young child were fast asleep when the killing occurred.

Relative Sampson Lepala said they’ve allowed the police to handle the case. The victims’ relatives from Kombiam Ambum District in Enga Province are calling on the perpetrators to peacefully surrender themselves to the police.

Meanwhile, the relatives have appealed to the Department of Education to assist with logistical costs. The victim’s body is now at the Port Moresby General Hospital awaiting investigations.

The worrisome upsurge of crime in Papua New Guinea in the lead up to the Christmas season has brought to light unresolved issues of police brutality, payback killings and gender-based violence that have not yet been actively addressed by the government or police force, the latter currently facing a factional conflict.

Kabwum Health Center: Out Patient Closed Due to Medicine Shortage