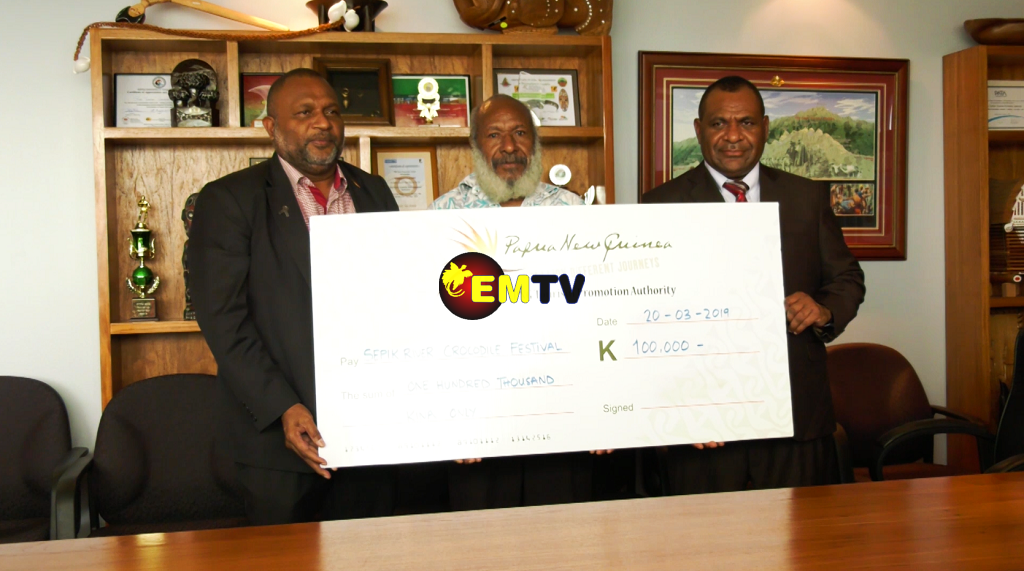 “The Crocodile has for centuries remained an integral part of the lives of the Sepik River people through their many ancient and sacred rituals be it for marriages, deaths, birth of a newborn child, seasonal harvests, feasts or scarification of young man to manhood,” said Tourism, Arts and Culture Minister, Emil Tammur.

The Sepik River Crocodile and Arts Festival will be happening on the 5th to the 7th of August, 2019, at Ambunti Station in the Upper Sepik River Region.

To boost preparations for this annual event, PNG Tourism Promotion Authority and the Tourism, Arts and Culture Ministry donated K100, 000 to sponsor infrastructure and proper facilities for the festival.

Established in 2007, the three-day cultural celebration highlights the crocodile and its traditional importance to the communities living along the Sepik River.

While officiating the presentation, Minister Tammur made mention that the number of tourists attending the festival has increased over the years, however; places to stay are very limited.

He said, “PNGTPA and my ministry cannot aggressively market the festival at this stage as I believe there are about only 60 proper lodges to accommodate tourists there.”

It is his hope that relevant authorities both at the national and provincial levels can assist local SMEs to build more suitable accommodation so PNGTPA can aggressively market and increase tourism numbers to the Festival and the wider Sepik region.

Present to receive the donation was Chairman of the Sepik River Crocodile Festival, Mr Alois Mateos who was grateful for the support and assured PNGTPA and the Minister that all money will be put into infrastructural improvements.

PHA Responds to Statements Made by NDA President

Oru creates his own legacy