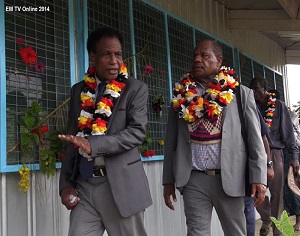 Concerned parents in the East Sepik province have backed the government’s decision to do away with the Outcome Based Education (OBE) system next year.

The parents said the OBE has “spoilt their children with no constructive outcomes”.

They have realised that many of their children now turn to home brew, marijuana and other illegal activities that many have claimed was a result of the “fail education curriculum”.

On Wednesday, many of these parents had the opportunity to express their dissatisfaction directly to the Education Minister, Nick Kuman and Secretary, Michael Tapo.

A parent, Willie Wamaingu said “the outcome of OBE is home brew and marijuana”. He is one of those that strongly supports the government’s move to get rid of the curriculum.

Minister Kuman said the OBE will be done away with next year and be fully implemented by 2018.