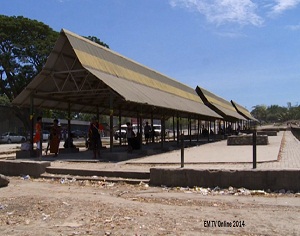 The Nine Mile market, outside of Port Moresby, has remained closed for almost a month now which has forced market vendors to find other places to sell their goods.

The market was closed on 13 October, following the attack on a police officer near the market. Since then, vendors have been travelling to Gordon’s in Port Moresby, or Sabusa in the Central Province, to sell their produce.

This has created inconveniences for vendors and an extra burden for them; and at most times, vendors are unable to sell their goods because of transportation issues.

Betty Metty, a local vendor, told EM TV News that following the closure of the market, she has had a hard time trying to sell water to make ends meet.

In a community meeting four weeks ago, the NCD Metropolitan Superintendent, Andy Bawa, told the Nine Mile community that the market would only be opened if the second suspect involved in the attack of his police officer surrendered to police.

Several private properties were burnt down during the aftermath of the attack on the police officer, with losses valuing up to millions of kina.

EM TV News understands that the police officer that was attacked, is still recovering.

PNGBA gears up for 2013 Championships