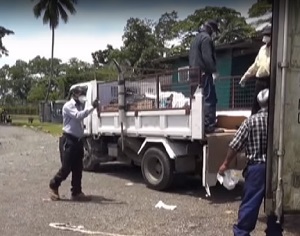 52 unclaimed bodies kept at the Lae’s Angau General Hospital Morgue were finally laid to rest at the second seven cemetery in a mass burial after almost 11 months.

Lae City Manager, Roy Kamen, said they had to remove the bodies to make space available at the Hospital Morgue.

The majority of the bodies belonged to Angau General Hospital patients who died at the hospital.

On Friday morning, the Lae City council workers removed 52 unclaimed bodies from the Angau hospital’s morgue. Half of the total numbers of corpse were babies.

The Lae City Council was approached by Angau General Hospital’s CEO to remove the bodies.

Two weeks ago, the city council had put out notices for relatives to claim the bodies, however, only two relatives claimed their deceased relatives.

Mr Kamen said it is not good for the city council to carry out a mass burial, but, they have no choice.

Kamen is appealing to the relatives of the deceased to give them a decent burial. He said they need to go to their villages and be buried there.

The unclaimed bodies were transported in two trucks from the hospital to the second seven public cementary. There, they are laid to rest.

This situation has also highlighted the need to expand the facilities at the hospitals morgue.

5G Not a Cause For Concern Says Masiu