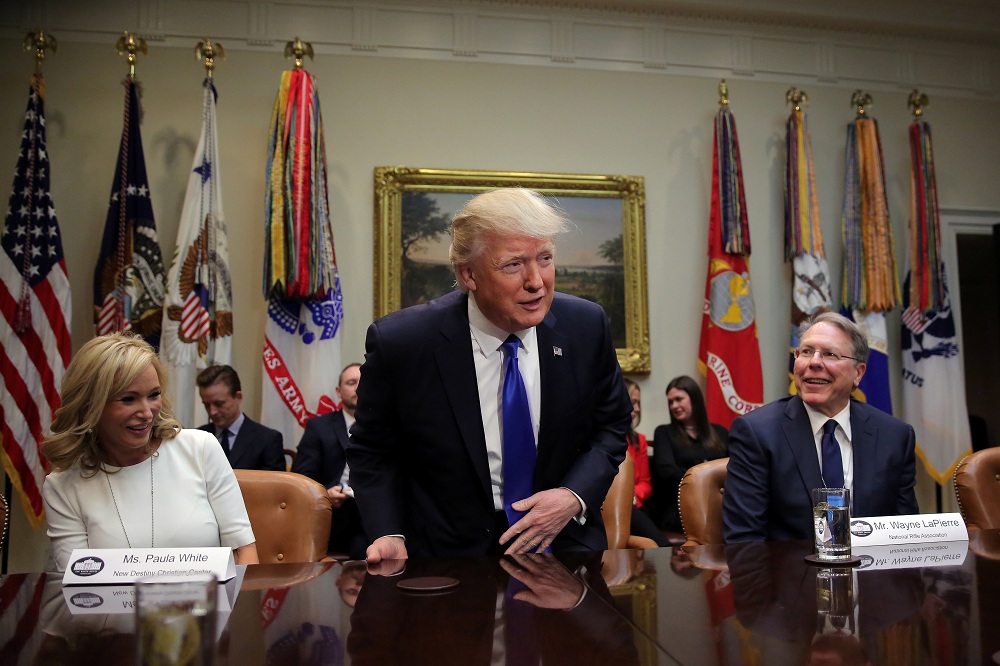 The administration faced a Monday afternoon deadline to justify in court the executive order that temporarily bars entry to the United States of people from seven Muslim-majority countries and halting the U.S. refugee program.

A federal judge in Seattle suspended the order on Friday, opening a window for people from the seven countries to enter.

The government had until 3 p.m. PST (2300 GMT) on Monday to submit additional legal briefs to the 9th U.S. Circuit Court of Appeals in San Francisco in support of Trump’s order. The case may ultimately reach the U.S. Supreme Court.

Ten former U.S. national security and foreign policy officials, who served under both Republican and Democratic presidents, filed a declaration in the court case arguing that the travel ban serves no national security purposes.

Over the weekend, the appeals court in San Francisco denied the administration’s request for an immediate suspension of the federal judge’s temporary restraining order that blocked the implementation of key parts of the travel ban while it considered the government’s request in full.

But the court did say it would consider the government’s request after receiving more information.

The new Republican president, who has said the travel measures are to protect the country against the threat of terrorism, has reacted to challenges to his ban by attacking the federal judge in Seattle and then the wider court system.

On a visit to the military’s Central Command headquarters in Tampa, Florida, Trump defended his order.

“Radical Islamic terrorists are determined to strike our homeland as they did on 9/11,” he said. “We need strong programs for people who love our country,” Trump said, adding that he did not want to allow “people who want to destroy us and destroy our country” into the United States.

The measures put a 90-day ban on entry for citizens from Iran, Iraq, Libya, Somalia, Sudan, Syria and Yemen and a 120-day halt to all refugees.

Attorneys general from 15 states and Washington, D.C., filed a brief on Monday in support of the lawsuit against the travel ban.

“President Trump’s executive order is unconstitutional, unlawful, and fundamentally un-American – and we won’t stand by while it undermines our states’ families, economies, and institutions,” said New York Attorney General Eric Schneiderman, a Democrat.

Top technology companies, including Apple Inc, Google Inc and Microsoft Corp were among nearly 100 corporations that on Sunday filed a similar brief with the appeals court, arguing the travel ban “inflicts significant harm on American business, innovation, and growth.”

Trump faces an uphill battle in the San Francisco court, which is dominated by liberal-leaning judges. And appeals courts are generally leery of upending the status quo, which in this case is lower court’s suspension of the ban.

The appeals court at this stage was focusing on the narrow question of whether the district court had grounds to put the order on hold. The bigger legal fight over whether Trump had authority to issue the order will be addressed later in the litigation.

The White House is confident that it will prevail in the legal back-and-forth, spokesman Sean Spicer said.

“Clearly the law is on the president’s side,” Spicer told reporters on Air Force One. “He has broad discretion to do what’s in the nation’s best interest to protect our people, and we feel very confident that we will prevail in this matter.”

Curbing entry to the United States as a national security measure was a central premise of Trump’s run for office, originally proposed during his campaign as a temporary ban on all Muslims.

U.S. presidents have in the past claimed sweeping powers to fight terrorism, but individuals, states and civil rights groups challenging the travel order said his administration had offered no evidence it answers a threat. Protesters have taken to the streets accusing Trump of discriminating against Muslims.

The government said the president was exercising his constitutional authority to control borders and that the law allowed him to suspend the entry of any class of foreigners who “would be detrimental to the interest of the United States.”

The New America think tank said that all of the people who have carried out fatal attacks inspired by Islamist militancy in the United States since the Sept. 11, 2001 attacks have been U.S. citizens or legal residents. None of those attackers emigrated or came from a family that emigrated from one of the countries listed in the travel ban.

A businessman who had never held public office until he assumed the presidency on Jan. 20, Trump has vented his frustration over the legal challenges with a volley of attacks on the judiciary.

Trump derided U.S. District Judge James Robart in Seattle, who issued the temporary stay on Friday, as a “so-called judge.” On Sunday, he broadened his Twitter attacks on Robart, who was appointed by former Republican President George W. Bush, to include the “court system.”

“Just cannot believe a judge would put our country in such peril,” Trump tweeted. “If something happens blame him and court system.” Trump did not elaborate on what threats the country potentially faced.

It is unusual for a sitting president to attack a member of the judiciary, which the U.S. Constitution designates as a check on the power of the presidency and Congress. Democrats seized on Trump’s remarks to raise questions about how independent his Supreme Court nominee, Neil Gorsuch, might be.