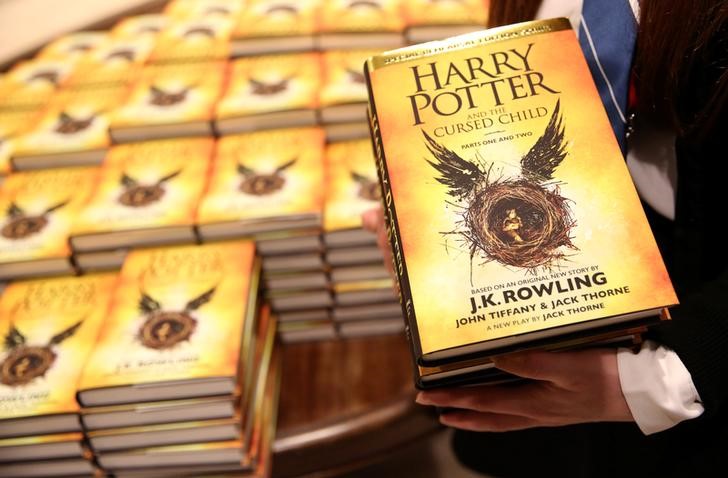 Image: A store assistant holds copies of the book of the play of Harry Potter and the Cursed Child parts One and Two at a bookstore in London, Britain July 31, 2016. REUTERS/Neil Hall/Files

LONDON (Reuters) – “Harry Potter And The Cursed Child”, a stage adaptation of J.K Rowling’s fantastical world of witches and wizards, cast a magical spell at the Olivier Awards on Sunday, scooping nine wins at Britain’s big night for theatre.

The critically-acclaimed production, which opened last year in London’s West End, went in with 11 nominations. Its victorious haul made it “the most decorated production in the ceremony’s history”, awards organisers said.

The eighth story in the “Harry Potter” series, the play follows Rowling’s young boy wizard and friends Ron and Hermione into adulthood. It took best new play, best actor, best actor and actress in a supporting role as well as best director.

“The power of imagination is infinite,” director John Tiffany said in his acceptance speech. “We need it now more than ever.”

“Thank you J.K. Rowling for creating Hermione and…the privilege of being able to play Hermione is overwhelming and humbling,” Dumezweni said.

Other winners at the glitzy ceremony at London’s Royal Albert Hall included children playing instruments in “School of Rock”, composer Andrew Lloyd Webber’s adaptation of the 2003 comedy film, who won in the outstanding achievement in music category.

“Groundhog Day”, an adaptation of the famed 1993 film starring Bill Murray, won best new musical as well as best actor in a musical for Andy Karl.

Billie Piper won best actress for “Yerma”, an adaptation of the play by Federico Garcia Lorca, which won best revival.

Actor and director Kenneth Branagh was honoured with the Special Award in recognition of his “outstanding contribution to British theatre”.

Performances on the night included songs from musicals “The Girls”, “Dreamgirls” and “School of Rock”.