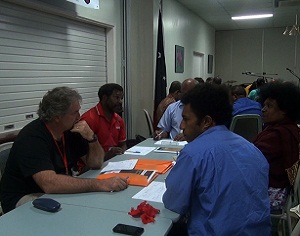 Gender-based violence is a highly prevalent issue in Papua New Guinea that has come under the microscope of the 2014 Church Partnership Program; the second biannual forum in Madang.

Seven mainline churches in Papua New Guinea and their Australian counterparts have affirmed their commitment in working together to promote and address gender equality under the theology of gender through the church network.

The churches have recognised the importance of gender equality, discussed under the theme ‘Creating An Enabling Environment For Inclusive Participation in Development’.

The church collective discussed the roles women and men play in promoting the God-intended fullness of life.

Their stand is: “men and women are created in God’s image and likeliness with dignity and are against all forms of violence. It recognises the need of a collaborative approach to development that values the role of gender equality”.

The Family Health International 360 has been working in partnership with the Baptist Union Church.

Mirriam Dogimab pointed out that a lack of response at the community level and urged churches to take a more visible stand on violence against women, starting with individuals.

The 2014 Church Partnership Program is supported by the Australian government in partnership with the PNG government.

The unique ecumenical network of churches is focused on bringing development to people in the most remote parts of PNG.

Fire Raged Down Business In Lae