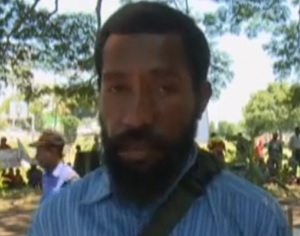 Close to 300 youths have surrendered more than a dozen homemade guns and homebrew equipment, to Port Moresby Police.

They came with banners calling for education, access to services and jobs.

The youths are all from the North-East Electorate who divided themselves into four zones.

They said through the association called Port Moresby North-East Youth Reformation, they want to engage themselves into beneficial activities.

The youths told NCD Metropolitan Superintendent and other dignitaries’ including parents that the resolutions are from their hearts.

Stanley James, who is the chairman of the youth group, revealed that many of them had contributed to the lawlessness in NCD and North East areas, especially at Gordons market.

The chairman on behalf of the youths presented their concerns to the office of the NCD governor.

Their concerns were all about seeking employment opportunities and education from the office of the elected local MP and the governor.

Director of Wormens Micro Bank on behalf of the local MP, Lambi  Amaiu announced four vehicles for the youths as a capital start for pilot projects.

She also made a personal commitment of more than K4,000 through cash and kind.

Meanwhile, Andy Bawa told the youths that he will work closely with them to address any lawlessness and crime in the city.