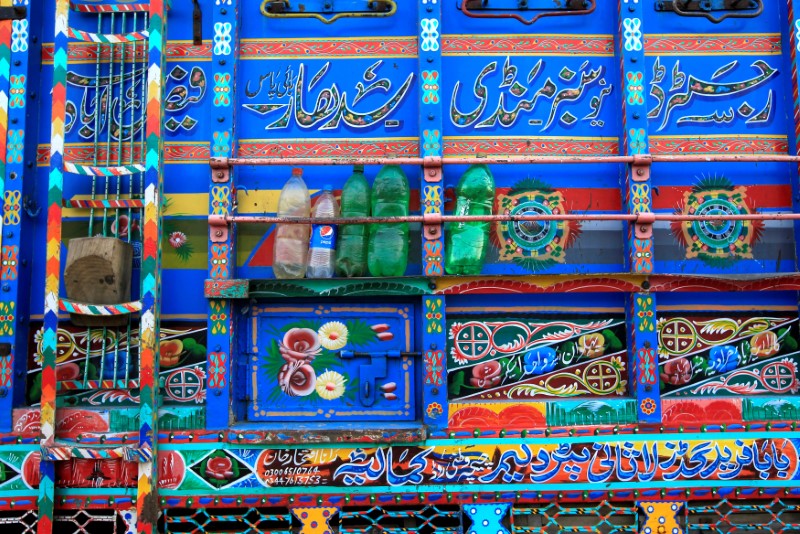 Image: Plastic bottles used to store water and a tyre stopper are wedged on the side of a decorated truck in Faisalabad, Pakistan, May 4, 2017. REUTERS/Caren Firouz

ISLAMABAD (Reuters) – They pollute the roads and chug along at a snail’s pace, but to their Pakistani owners the rickety trucks are moving pieces of art, commanding attention with garish portraits of flowers, Islamic art, and snow-capped Himalayan peaks.

Yet closer to home some people sneer and refuse to call it “art”.

For the drivers, the designs that turn decades-old vehicles into moving murals are often about local pride. Picking the right color or animal portrait is tougher than the countless hours spent on the road.

Truck driver Haji Ali Bahadur, who hails from the tribal belt bordering Afghanistan, said green and yellow have been his colors of choice during 40 years behind the wheel.

“We, the drivers of Khyber, Mohmand and other tribal regions like flowers on the edge of the vehicles,” he said. “The people of Swat, South Waziristan and Kashmir region like portraits of mountains and different wild animals.”

Truck art has become one of Pakistan’s best known cultural exports and offshoot toy and furniture industries have been spawned closer to home.