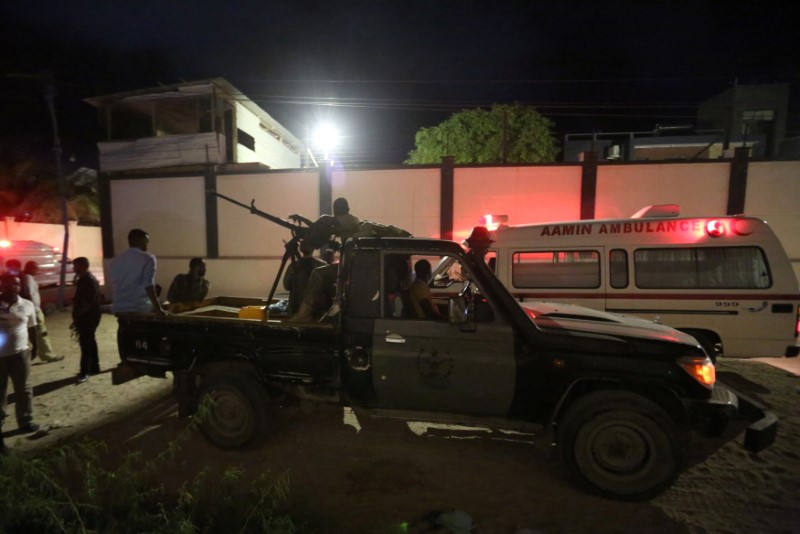 Image: Armed security forces and rescue personnel are seen at the scene of an attack outside an hotel in Mogadishu, Somalia June 14, 2017. REUTERS/Stringer

MOGADISHU (Reuters) – Gunmen were holding at least 20 people hostage in a restaurant in Somalia’s capital Mogadishu on Thursday, police said, after a suicide bomber rammed a car next door and militants stormed inside in an attack claimed by Islamist al Shabaab militants.

Police cordoned off the whole district surrounding Mogadishu’s Pizza House, which is adjacent to the Posh Hotel where the suicide bomber attacked first, witnesses said. Posh Hotel is the only venue with a discotheque in the capital.

“The fighters are still inside Pizza House and they hold inside over 20 people. We do not know how many of those are dead or alive,” Ibrahim Hussein, a police major, told Reuters.

Earlier on Wednesday, police said nine people, mostly women who were hotel staff, had died in the attack.

Security officials said the suicide attacker had rammed the explosive-laden car into the hotel’s entrance before gunmen stormed the restaurant.

“A suspected car bomb is also parked in front of Pizza House. This and snipers have made it difficult for the security forces to head inside,’ said Hussein.

Other officials said victims inside the hotel had been safely evacuated but that there were likely to be more than nine casualties.

Al Shabaab claimed responsibility. The group has carried out a campaign of suicide bombings in its bid to topple the Somali government and impose its strict interpretation of Islam.

“A mujahid (fighter) with his suicide car bomb martyred himself after he rammed into the Posh Hotel, which is a nightclub. The operation goes on,” Abdiasis Abu Musab, the group’s military spokesman, told Reuters.

Since losing large swathes of territory to African Union peacekeepers supporting the government, the group has frequently launched raids and deadly attacks in Mogadishu and other regions controlled by the federal government.

The Horn of Africa country has been racked by armed conflict since 1991, when clan-based warlords overthrew dictator Siad Barre and then turned on each other.