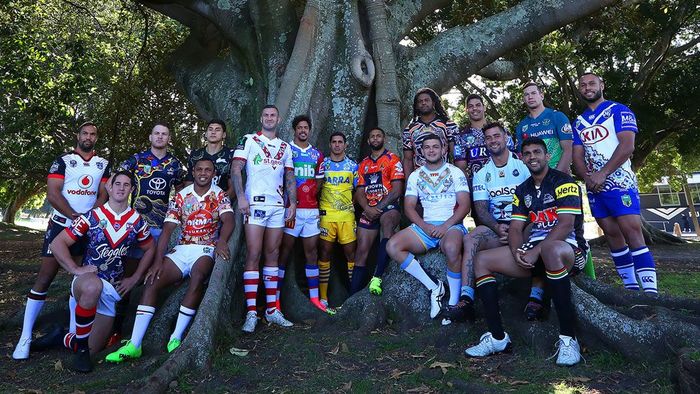 What a great Thursday night game to whet the old NRL appetite.
And like so many great Queensland teams before them, the Cowboys left me with egg on my face. My tipping game just took a nose dive. For anyone that missed the game, the Cows accounted for the Dogs all too easily 30-14.
But that’s all water under the bridge now; let’s get the rest of these Indigenous round previews sorted, shall we?

The Dragons battle it out with the defending premiers Cronulla this afternoon. Without taking too much away from this spectacle, injuries to Dragons star duo Josh Dugan and Gareth Widdop have taken a bit of gloss away from what promised to be a classic matchup; with the two teams currently locking down positions 2 and 3 respectively on the NRL Telstra premiership table. Starting from a 1 point loss to the Roosters in round 8 and then another loss to the Storm in their last hit out, the Dragons will be out to stop the rot against a Sharks outfit who are also trying to consolidate their place in the top 4 after a shock loss to the Titans, and a narrow win to the Tigers. This local derby promises plenty of feeling; and after the Red V’s 16-10 ambush in round 3, the men from the Shire will want to return serve.

Tip: On current form I am hard pressed to split them. With both teams boasting mobile packs and exciting backlines this is hard to call but the Dragons without Dugan and Widdop, and Cronulla being steered around the park by Maloney and Townsend, I will put my money on the Sharks to sneak past the joint venture in the 2nd half. Sharks by 12.

13th plays 14th in the second Friday night game and though it doesn’t sound exciting it may well be a season defining 80 minutes for both teams. They last met in round one with the Tigers walking away 34-16 victors. Since then the Tigers have only managed two wins against the Dogs and Cowboys. The Rabbitohs haven’t fared that much better with their only “major” scalp being an out of sorts Eagles in round 2 and wins over fellow 2017 strugglers the Panthers and Knights. The loss of Greg Inglis for what may be the season hasn’t helped things along as well. Of the two teams the Tigers have a more settled line up with only captain Aaron Woods out with a hamstring injury. The Cardinal and Myrtle welcome back outside backs Braidon Burns and Aaron Gray but fitting them into an already busy backline roster may be an issue for coach McGuire.

Tip: There’s practically nothing separating these two teams at the moment but Nathan Cleary has a knack underperforming teams to fire on all cylinders. With all the “big four” contract dramas almost cleared I’ll back the joint venture put on a polished performance and pip the foundation club.
Tigers to win.

No two teams have disappointed more than the two opening up Saturdays NRL clashes. During the off-season and all off the 2017 preseason the hype was all the Panthers. With a host of talented youngsters in the squad that left one and all in their wake with an exciting brand of football only fell short three games of the 2016 decider, many had them chalked down in the top 8 if not the top four. Names like Moylan, Mansour, Cartwright, Peachey, Wallace, Cleary, Merrin, the recruitment of Tamou, excitement over Martin and the return of Hiku and Whare; these names had the Chocolate Soldiers faithful not-so-quietly confident. Fast forward to May 2017 and the wheels on the Panthers wagon are almost off.
Ditto the enigma that is the Warriors. When they plucked Kieran Foran’s signature out of thin air last September, Wow! Across the Tasman long suffering fans hearts skipped a beat. In some circles that one thought, “This could be our year”, was so intense as to seem almost tangible. The word palpable springs to mind. With an all Kiwi test spine of Tuivasa-Sheck, Johnson, Foran and Luke and the undoubted talent of Mannering and Hoffman in their backrow, optimism was the favour of the month. Well if they don’t start winning soon it’ll be another looong season.

Tip: With no great confidence I’m going the Warriors in a try fest. The only reason being the Panthers, 2nd last on the table, have only between two teams this season, the Tigers and Knights who sit 3rd last and last respectively.

What can you say about the Storm? Love them or loath them they are clinical. They sit at the apex of “Mt. NRL” with a 4 point buffer clear of the nearest contender. Year in, year out they have set the NRL standard and will be without a doubt, in the thick of it come September.
What can you say about the Titans? There’s no doubting the boys from the sunset are fighters. They just won’t go away. In the past three weeks they’ve pushed the Broncos all the way to a last minute, heartbreaking 22-24 loss, beaten the defending premiers 16-12 and understandably smoked the last placed Knights 38-8
Most impressing is that they’ve done this with a huge chunk of their first choice squad out with injury.

Tip: Any team with Jarryd Hayne in it will be formidable. Add to that the emergence of young pivots Kane Elgey and Ashley Taylor, in form hooker Nathan Peats and half-cum-fullback Tyrone Roberts and you’ve got a serious footy team. But I’m tipping the Storm in a thriller.
Why? Three names, Billy Slater, Cooper Cronk and Cameron Smith.

This has the makings of a classic. The Eagles, well they’ve been soaring like eagles recently. Pun intended. Knocking of fancied rivals the Cowboys, Roosters and Raiders in recent weeks and giving the Rabbitohs a 46-8 shellacking last round, it seems the Silvertails are on the up and up.
And the Broncos? A horse is a horse, of course; of course. Pun intended as well! But seriously they are the Broncos and they always find a way to win or die trying. This will be an absolute cracker if both teams come to play. Sadly I feel robbed that Jimmy the Jet isn’t available. It would have been an epic battle with fellow flyer Dylan Walker.

Tip: Manly are 1-17 from their last start and will be confident if they start fast.
The Broncos have David Mead coming in for the injured Roberts and though Ben Hunt has been missing for the last two weeks they’ve hardly skipped a beat with Kodi Nikorima filling in admirably at halfback.
Broncos to win.