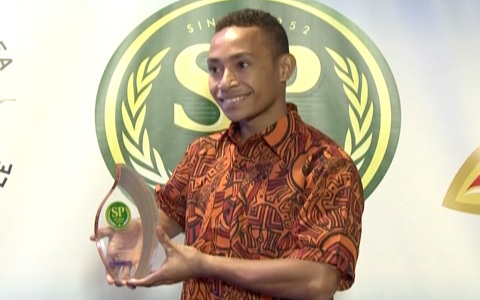 Steven Kari and Abigail Tere-Apisah have been awarded the Sports man and Woman of the year for their performances in 2013.

A total of 14 different categories had had nominations with the sport of weight lifting taking out a number of them.

It was a night to celebrate the outstanding sporting achievements from PNGs sporting heroes.

There was a lot of glitz and glamour on show as the who’s who of the sporting fraternity turned up for the event.

SP brewery CEO Stan Joyce spoke of his company’s obligation to reinvesting into the nation and of pride and unity through sport.

Minister for Sport and the Pacific games, Hon. Justin Tkachenko, reiterated the government’s support and the lasting legacy of the games.

Guest speaker of the night, dual Olympian, and Oceania and Australian record holder Patrick Johnson, outlined the hardships faced by many people and how perseverance and determination were key factors in success.

Fourteen categories of awards would be rewarded to 20 different codes and clubs, including ‘Technical  Official of the Year’, ‘community sports initiative’ and of course the sportsman and woman of the year.

The sport of weightlifting dominated the ceremony with six nominations and taking out four.

Including both the Junior female and Junior male athlete of the year award as well as sports club of the year.

The Hebou PNG Barramundis took out the team of the year after strong performances internationally.

The coveted Sports Woman of the Year went to Abigail Tere-Apisah in Tennis, with her parents accepting the awards on her behalf.

The Sports man of the year award went to Steven Kari in Weight lifting, his proud father giving these words of encouragement.

On the cusp of the pacific games, the awards will serve as motivation for other athletes throughout the country

Bryan Adams goes retro with ‘Get Up’ album