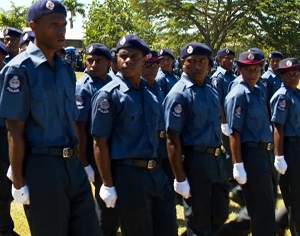 The initial six months training for police officers at Bomana training college outside Port Moresby has dropped to only four months.

This means that new police recruits who are passing out, and those who will be recruited in future, will only undergo four months of training.

Because the Government’s push for more police officers, the department is increasing the number of new intakes, and cutting down on time previously needed to get them ready for official police work.

Police acting deputy Commissioner, chief of operations, Jim Andrews, said this is necessary to meet the government’s demand for more officers by 2017.

“We decrease six months of training time to four because of the government’s request on the department to produce some 10, 000 personnel’s by 2017.

“The four months is only classroom lessons but they (new graduates) will have to undergo over 12 months of practical as probationary constables  before they are confirmed and appointed to the rank of constables in the constabulary” Acting deputy Commissioner Andrews said.

Government To Focus On Rural Development