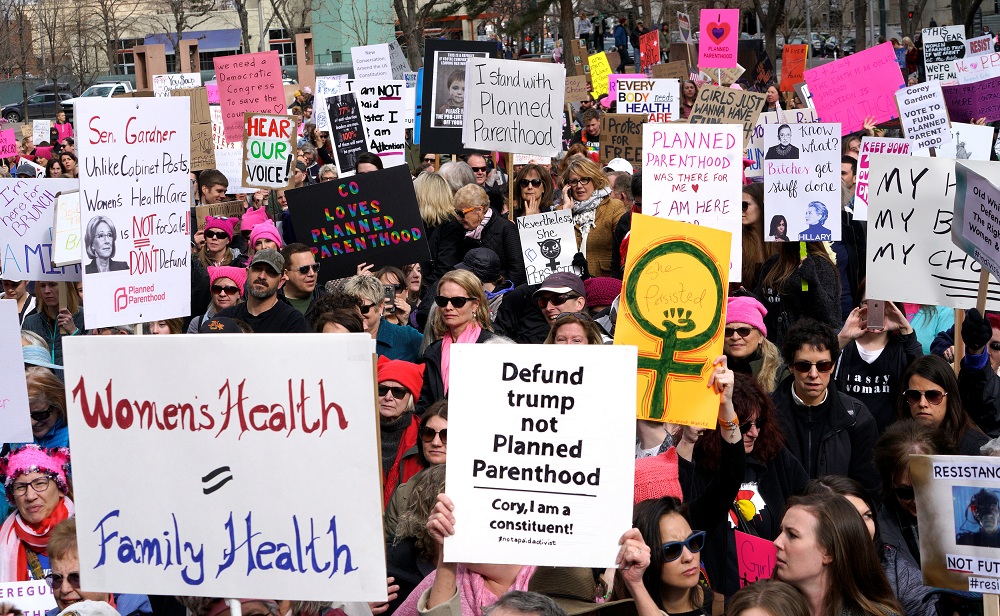 By Lacey Johnson and Rich McKay

WASHINGTON/MARIETTA, Ga. (Reuters) – Anti-abortion protesters rallied at scores of Planned Parenthood clinics on Saturday to urge Congress and President Donald Trump to strip the health services provider of federal funding, while supporters of the organization staged counter-demonstrations around the United States.

With anti-abortion groups expecting protests at up to 225 clinics, Planned Parenthood supporters organized 150 protests of their own at parks, government buildings and other sites, including clinics. At some of those clinics, the counter-demonstrators outnumbered those demanding an end to federal funding for Planned Parenthood.

All told, rallies and marches were called in 45 states in cities large and small, from Washington and Philadelphia to St. Paul, Minnesota, and Orange, California

As many as 6,000 people turned up for competing demonstrations in St. Paul, Minnesota, police said, but at other places, only a few dozen demonstrators turned out.

“We expected that tens of thousands of pro-lifers will be out today sending a message that we want Planned Parenthood to be defunded,” Monica Miller, director of Citizens for a Pro-Life Society and one of the national organizers of the anti-abortion rallies, said in a telephone interview.

“As long as they are going stay in the abortion business, that is an organization that shouldn’t be getting one red cent of federal tax money,” Miller said.

The 100-year-old organization of about 650 health centers provides birth control and other women’s health services in addition to abortion, according to its website.

The U.S. Supreme Court legalized abortion in the 1973 Roe v. Wade ruling but U.S. law prohibits the use of federal funds for abortions. Anti-abortion activists say funding for other purposes acts to subsidize abortions.

In some cities, the two sides in the long-simmering issue positioned themselves along the same street. Initial reports indicate the rallies were vocal and peaceful.

In the Atlanta suburb of Marietta, anti-abortion and abortion-rights groups took opposite sides of a four-lane highway, waving signs at traffic and shouting slogans.

“Trump is going to hear our trumpet call,” said anti-abortion activist Sandy Prescott, 61, a homemaker from Roswell, Georgia, who was part of a group of about 100 people demanding an end to federal funding for Planned Parenthood.

At the competing abortion-rights demonstration, about 50 people gathered and held signs that included: “Women’s rights are human rights.” Many wore the pink “pussy hats” that have became an anti-Trump symbol since the Republican’s inauguration on Jan. 20.

David Daleiden, an anti-abortion activist who in 2015 targeted Planned Parenthood with surreptitiously filmed videos to try and show it was profiting from the sale of aborted fetal tissue, addressed a rally of nearly 500 people in rain-soaked Orange, a Los Angeles suburb.

“I’m confident that together, if we keep the faith, take the next right step, at the end of the day we will soon see a day when there will no longer be a price tag put on human life,” said Daleiden, founder of the Center of Medical Progress.

Daleiden and fellow activist Sandra Merritt were indicted in January 2016 for using illegal government identifications to secretly film a Planned Parenthood facility in Texas, but the charges were later dropped. A grand jury cleared Planned Parenthood of wrongdoing.

Anti-abortion activists have said they are energized by the election of Trump, who has promised to restrict abortions. He selected their long-time ally, Mike Pence, as vice president, and nominated conservative jurist Neil Gorsuch to the U.S. Supreme Court.

Two weeks ago, tens of thousands converged on Washington for the 44th March for Life, where Pence became the most senior government official to speak in person at the annual anti-abortion rally, organizers said.

“We finally have someone in the White House who has the power and authority to save and defend lives,” said Margie Sznajder, one of 300 anti-abortion protesters at a rally in her hometown of Aurora, Illinois, outside Chicago.

Planned Parenthood leaders say abortions rights supporters also have been energized by Trump’s election, as exemplified by the hundreds of thousands who flooded Washington a day after Trump’s inauguration in favor of women’s rights, including abortion rights.

In Denver, hundreds gathered outside the office of U.S. Senator Cory Gardner, urging the Republican not to pursue funding cuts. Some in the energetic but peaceful crowd carried signs with slogans like “I refuse to go back to the 1950s,” and “If it’s not your body, it’s not your decision.”

The pro-Planned Parenthood events on Saturday were organized spontaneously, without the group’s initiative, a spokeswoman said.

“Abortion, to me, is the greatest evil of our time,” said Delia Tyagi, 36, an accountant who lives in Arlington, Virginia. “Planned Parenthood has wronged women in a lot of ways. I feel like we have the momentum to finally defund them.”