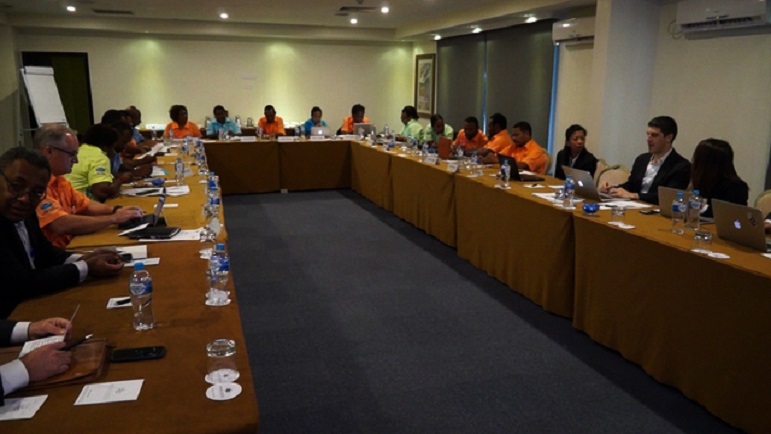 Two years from now, Papua New Guinea will host one of its biggest ever international events, in the Asia-Pacific Economic Cooperation, or APEC.

The Papua New Guinea APEC Coordinating Authority, is already building its knowledge base and experience.

Last week, the APEC Secretariat, based out of Singapore, facilitated a capacity building workshop, on Strategic Communications.

Communication is key in educating the host country about the benefits of APEC, an integral part of hosting lead-up events to APEC 2018.

More than 10,000 delegates will visit Papua New Guinea for an event that will bring with it, many opportunities for business and employment.

PNG APEC Authority CEO, Christopher Hawkins, who attended his first APEC Summit for Papua New Guinea in 1998, says communicating the level of benefits that the global event will bring to the people, is vital.

“We need to work together to really show the benefits of why we are hosting APEC. Why PNG is part of APEC. What it means to famers, and those in the fisheries industry, and what it means to small business, and people who can really use the support, and the knowledge, and the skills that can be imparted through APEC, to create jobs, and help enhance people’s lives,” Mr Hawkins says.

PNG’s Senior Official to APEC, Ivan Pomaleu, says a large part of preparing for the meet, is ensuring the capacity of government departments to communicate effectively with the public. This discussion, a priority, will be about APEC policy development.

“When we do host, we will be thinking a lot about how we help the APEC community put the message out in terms of where we are at the policy interventions, but also how those policies affect the common people,” says Mr. Pomaleu.

PNG is still two years away from the Leaders’ Summit in the Nation’s Capital, but preparations are already in full swing.

Pocholo Goitia, who worked for the Philippine President’s Office when the country hosted APEC in 2015, is in the country with the APEC secretariat. He says, there’s enough time to prepare well, for any contingency.

“What I’ve seen, is PNG is very prepared, given the timeline for APEC.

“There are going to be a lot of challenges, but what I’ve seen is the capacity to meet most challenges that I can think of,” Says Mr. Goitia.

Papua New Guinea has already successfully hosted smaller APEC meetings over the past year, as well as other major summits, including the African, Caribbean and Pacific Leaders Summit.

With continued advice, training and communication, the PNG APEC Authority, and the country, will be able to successfully host APEC 2018.

Parkop Confident of Achievements from 10 years as NCD Governor