Papua New Guinea is taking a multi-pronged approach to energy provision. Business Advantage PNG takes a look at how the nation is meeting its fast-growing power needs.

Papua New Guinea’s national energy strategy that mostly emphasises the use of renewable sources. Construction of three huge hydro power schemes is proposed, as part of the government’s goal of increasing household access to electricity from currently 12 per cent to 70 per cent by 2030, and to provide a reliable electricity supply across the country.

In addition, solar power, LNG and biomass energy production projects are being developed.

By far the biggest prospective project is an 1800 megawatt (MW) dam project at Karimui, Chimbu Province. This US$2 billion project will take six years to build, with the work to be carried out by the Italian company, Salini Impregilo.

Another large hydro scheme is the Ramu 2 Hydro Power scheme, a 180 MW hydroelectric power station on the Ramu River, near Kainantu in the Eastern Highlands Province.

This US$2 billion (K5.97 billion) scheme will lift electricity generation capacity by 36 per cent, according to sources at Kumul Consolidated Holdings, which is managing the project.

The project will operate under a Public-Private Partnership (PPP) model. China’s Sinohydro Corporation Limited and Shenzhen Energy Group have been awarded the contract to construct it.

According to Project Manager, Charles Gubei, negotiations on the project began in 2009. The major funding of K630 million has come from the Hunan Provincial Government of China, and AG Investment.

Hydropower is also replacing high-cost diesel generation in smaller centres. PNG Forest Products has three hydropower stations at Baiune in Morobe Province, with a combined installed capacity of 15 MW, while state utility PNG Power (PPL) is constructing a new 3 MW Divune hydroelectric project at Popondetta in the Oro Province. Power from this site will feed the provincial capital, Popondetta and the tourist town of Kokoda.

PNG Biomass, which is wholly owned by Oil Search, has entered the Front End Engineering and Design (FEED) phase of the proposed Markham Valley Biomass Project. 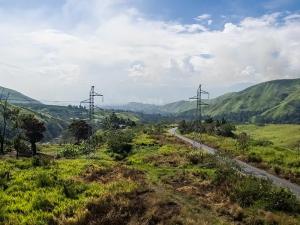 The project involves using woodchips that are sourced primarily from new indigenous plantation trees grown in the Markham Valley, which is located approximately 55 kilometres north-west of Lae.

It will generate up to 15 MW—which may go up to 30 MW—of renewable, biomass-fired, base load power for the Ramu Power Grid.

The FEED stage process will refine the technical and commercial aspects of the project, ahead of a final investment decision, which is expected before the end of 2017.

In 2015, PNG Power signed an agreement to buy LNG from ExxonMobil at half the current diesel rate to supply the capital, Port Moresby. The agreement is producing up to 25 MW of electricity (about a fifth of Port Moresby’s requirements), coming from the PNG LNG plant. It is a five-year agreement that will lapse when the PNG LNG joint venture needs the power for a third train.

At the end of 2016, ExxonMobil announced plans to build another 50 MW power plant outside Port Moresby. Andrew Barry, Managing Director of ExxonMobil PNG said the power plant will use gas from the PNG LNG project.

‘A 26 MW General Electric Gas Turbine generator was installed at the Lae Port in January 2016.’ 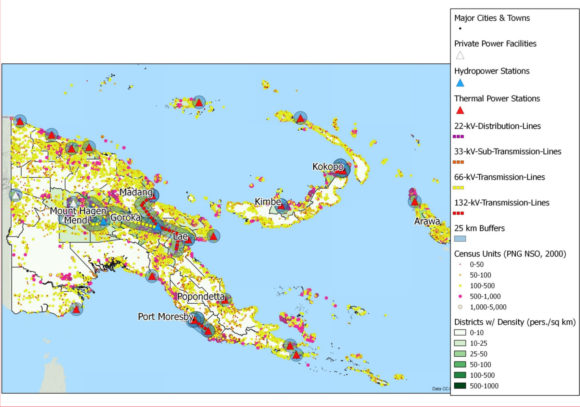 Barry said the power plant will provide one of the most cost effective sources of generation for PNG Power.

‘We need to focus on options that can be scaled as demand increases, like the planned power project in Port Moresby. It has been designed such that it can be expanded to a total of 200 MW as required. ‘ Barry added that only ‘relatively minor investments’ will be required to match supply and demand.

A 26 MW General Electric Gas Turbine generator was installed at the Lae Port in January 2016. PNG Power also commissioned the Korean company Daewoo to build a heavy oil plant at Munum, just outside Lae, which, when commissioned, is expected to generate a further 30 MW of power into the Ramu grid.

A second transmission line from the Ramu 1 power station to Lae, is also nearing completion.

PNG has considerable potential for solar power, the cost of which is falling quickly.

In 2016, PNG Power signed a memorandum of understanding to work with the International Finance Corporation (IFC) to establish a way for the private sector to become involved in roof top solar.

In 2017, PNG Power also signed a Memorandum of Understanding with the Central Provincial Government and South Korean company, K&P Limited to conduct a feasibility study into the development of a 50 MW solar farm.

If it goes ahead, the electricity would be supplied onto PNG Power’s Port Moresby system.