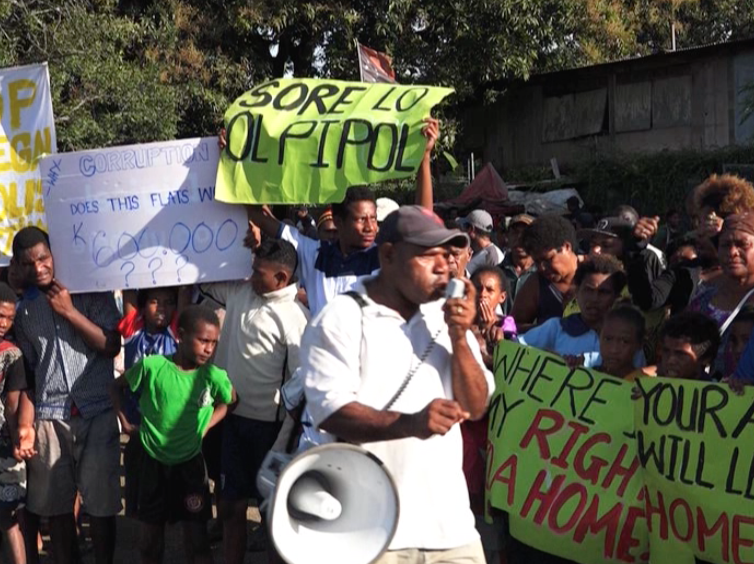 Over 2000 people living in the National Housing Commission flats in Gordons may be left homeless following a demolition notice issued last week by National Capital District Commission Building Board on grounds of health hazard.

The property was formerly owned by NHC but was sold to a business man in 2007.

The tenants, led by George Kakas as lead plaintiff, took the matter to court and the scuffle for the flats has been going on for years now. They recently filled a Supreme Court proceeding and are fighting for their homes, still at risk of being demolished.

Yesterday, men, women and children gathered in front of the flats and questioned the demolition. While raising their concerns to Moresby Northeast MP, John Kaupa, and awaiting Housing Minister, Justin Tkatchenko, to give his address, a riot broke out when an excavator drove in to the area. Fortunately the situation was contained quickly by police personnel.

Most of the tenants have lived in the flats for many years with third and fourth generations of families and their concern now are the questions: ‘where will they go if the demolition were to happen?’ and ‘what will become of their children’s education?’

Housing Minister, Justin Tkatchenko, assured the people that no demolition will take place until the matter is being looked into. What remains unclear is whether the matter will be resolved in court or the demolition will go ahead.

Australia could soon have a new Pacific nation next door