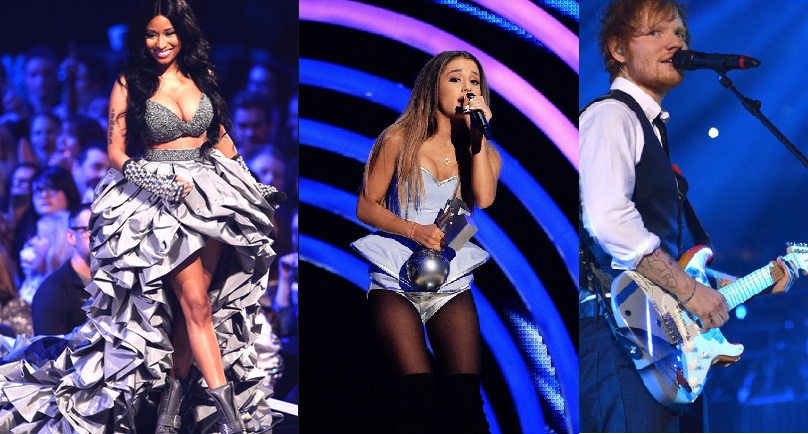 Before the night of show, Nicki Minaj had promised all the music lovers who’d be present at the arena and a global TV audience that she would deliver and be the most memorable host.

Nicki Minaj sparkled at ‘The 20th MTV Europe Music Awards’, as a sleek host at Glasgow, Scotland with her Scottish accent topping it off with a flawless rap about shortbread and whiskey.

The Anaconda singer took double duty as she was the host as well as a performer. In between, she accepted the award for best hip-hop, beating Kanye West, Iggy Azalea, Eminem and Drake.

Dressed in a black cat suit, her performance consisted of a three-song set that opened with her first ever hit Superbass, breaking into a special treat for her fans – a preview of her new song in collaboration with Skylar Grey which apparently the twitter world has titled as ‘Bed of Lies’. The super star closed with her singature dance moves to her raunchy hit ‘Anaconda’.

Meanwhile, pop star Arianna Grande was sparkling alongside Minaj with a thumping performance from one of her string of hits ‘Break Free’, as well as snatching the awards for ‘Best Female Artist’ and ‘Best Song’ for her hit ‘Problem’.

Among many memorable performances was, Irish Band U2 performing, Every Breaking Wave from their 2014 album Songs of Innocence, while Ed Sheeran made an epic performance of his hit Thinking Out Loud that left a crowd falling in love with him.