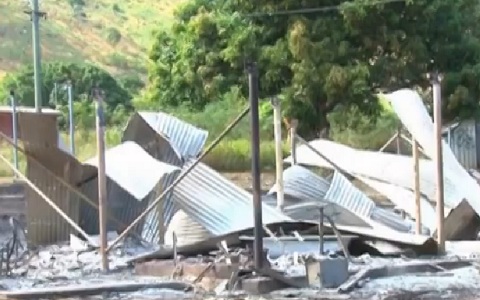 People in Kirakira village are living in fear after soldier’s rampaged their village yesterday.

This afternoon, more women and children including the elderly people vacated the village after receiving a call that the soldiers are mobilising and will move in again.

The atmosphere in the village was unusual this afternoon.

Usually, Sunday afternoon’s has children playing on the streets and people mingling with each other.

However, today, this was not the case.

At half past one this afternoon, a villager received a call that the soldiers are preparing to attack the village the third time.

Information was spread using a loudhailer, and people, especially women and children were forced to vacate the village.

Houses were empty and men walking around in the village with iron rods and bush knives.

However, until this story was filed, the soldiers haven’t gone back to the village.

The soldiers’ retaliated after one of their comrades was killed in the village.

The cause of his death was yet to be confirmed with the police.

Last night when EMTV visited the village, these houses were still in flames.

Amongst those that lost their houses were the country’s Chief Migration officer, Mataio Rabura and Post Courier’s Journalist, Kila Nao.