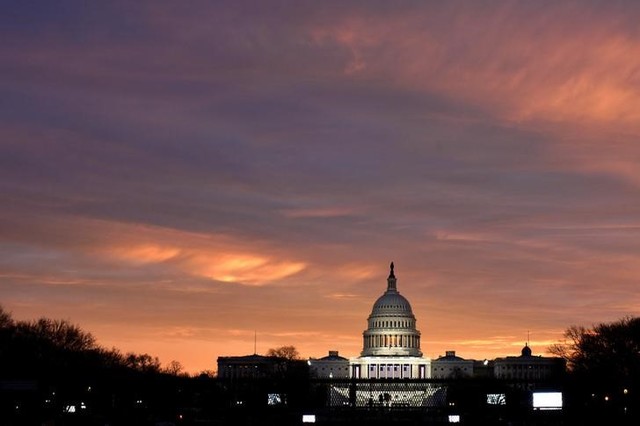 Image: The sun rises over the U.S. Capitol on the National Mall before U.S. President-elect Donald Trump is to be sworn in in Washington, U.S., January 20, 2017. REUTERS/James Lawler Duggan

(Reuters) – Donald Trump was sworn in as U.S. president in Washington on Friday, taking over from Barack Obama. Highlights of the day:

Donald Trump is sworn in as the 45th president, vowing to end “American carnage” of social and economic woes in an inaugural address that was a populist and nationalist rallying cry.

The Trump administration quickly updates the White House website to say Trump is committed to eliminating the Obama administration’s Climate Action Plan and other environmental initiatives.

Trump’s first official actions as president include sending his Cabinet nominations to the Senate and calling for a national day of patriotism.

Anti-Trump protesters smash windows and block traffic in Washington and fight with police, who respond with pepper spray and stun grenades.

Trump supporters dance and drink in Washington to celebrate a president they say will shake up a corrupt, out-of-touch system.

London’s Tower Bridge is the site of one of many protests around the world aimed at Trump.

Investors are starting to wonder whether Trump will be a game changer bringing lower taxes and looser regulation.

The U.S. stock market performed well during the transition to Trump but investors should recall the oscillations that came with Obama.