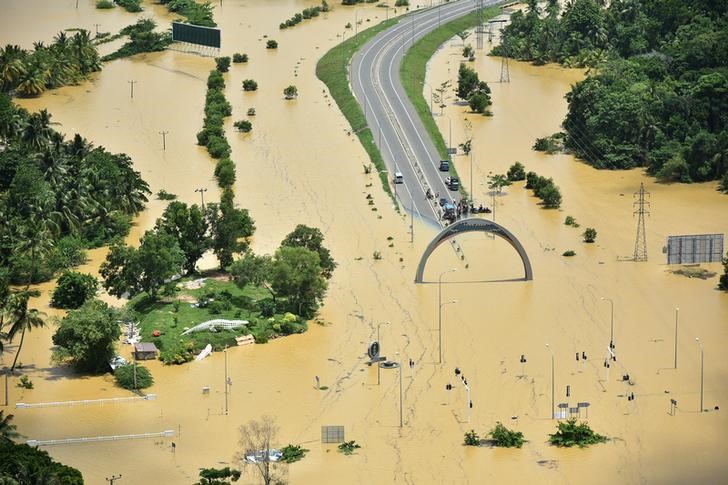 COX’S BAZAR, Bangladesh (Reuters) – A cyclone battered refugee camps in Bangladesh on Tuesday where hundreds of thousands of Rohingya Muslims from Myanmar have taken refuge from violence at home, as authorities moved at least 350,000 Bangladeshis out of harm’s way.

The border area is also home to refugee camps for Rohingyas who have fled their homeland in northwest Myanmar.

Shamsul Alam, a Rohingya community leader, told Reuters that damage in the camps was severe with almost all the 10,000 thatched huts in the Balukhali and Kutupalong camps destroyed.

“Most of the temporary houses in the camps have been flattened,” Alam said.

Cox’s Bazar district chief Mohammad Ali Hussin said at least 15,000 houses in the district had been destroyed and he had unconfirmed reports of three people killed and dozens injured, including several Rohingya refugees.

Officials in Chittagong reported winds gusting up to 135 kph (85 mph), and said low-lying coastal areas were flooded by a storm surge with waves 2 metres (7 feet) high.

Flights in the area were cancelled.

Last October, following a Myanmar army operation launched in response to insurgent attacks, an estimated 74,000 Rohingyas fled to Bangladesh where they joined more than 200,000 who have taken refuge there over the years.

The Bangladeshi government has estimated that in all, there are about 350,000 Rohingyas in Bangladesh.

In predominantly Buddhist Myanmar, where Rohingyas are officially denied citizenship and classified as illegal immigrants, about 120,000 of them have been internally displaced by communal violence over recent years and are living in camps.

A U.N. official working with Rohingya refugees in Bangladesh said the damage in the camps could not be assessed while the storm was raging.

“Heavily pregnant women have been evacuated but most people in areas like Balukhali and Kutupalong makeshift settlements have stayed,” said the official, who declined to be identified.

“The winds are strong and people there live in flimsy structures, so we’re worried.”

In Myanmar, about 300 houses were damaged in Rakhine State but the extent was unclear, the government said.

But Bangladeshi weather officials said the cyclone was not as bad as they had feared.

“The severity was less than the apprehension,” Shamsuddin Ahmed, a weather official based in Chittagong said.

The cyclone was expected to weaken in Bangladesh by late morning as it moved inland towards India where authorities have warned of heavy rain in the northeastern states of Tripura, Mizoram, Manipur, Nagaland and Arunachal Pradesh.

The cyclone formed after monsoon rains triggered floods and landslides in Sri Lanka, off India’s southern tip, killing at least 180 people in recent days, authorities said, adding 99 people were missing and 112 had been injured.

In the eastern Indian state of Bihar, 24 people have been killed in recent days, either by lightning or in collapsed dwellings.

While the rains bring death and destruction every year, they also underpin life across the region.

Monsoon rains arrived at on India’s southern coast on Tuesday, a weather office source said, making it the earliest since 2011 and setting India up for higher farm output and robust economic growth.

Timor-Leste experience a positive one