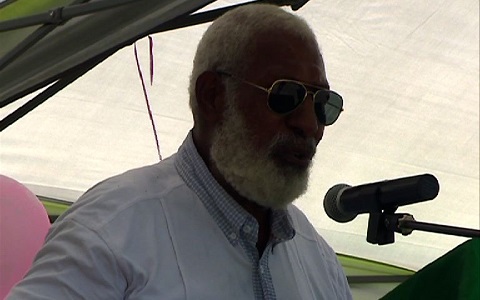 Clan leaders of the six Ahi villages in Morobe province are now calling on the National Government to allow them to own shares in  the developments taking place in Lae city.

They said they have been left on the sideline as spectators for many decades and now they want the government to address their concern.

Lae MP Hon Loujaya Kouza responded to them saying, the Prime Minister has appointed a committee to hold discussions with clan leaders to address this issue.

The six Ahi villages are important communities in Lae City. The villagers are made up of 37 landowner clans for Lae.

With new developments taking place, most of the land areas have been given out for this development.

The clan leaders say that they are not getting what they deserve from the government for the developments taking place in the city.

They have called on Lae MP Loujaya Kouza to bring their councscince to the floor of parliament.

Speaking during the ground breaking ceremony of a new community hall at Butibum village, Miss Kouza gave assurance that the Prime Minister’s appointed a working committee to hold talks with clan leaders on possibilities of having a benefit sharing agreement.

With Lae said tyo be the Industrial Hub of the country, more land areas are going to be needed to facilitate the growth.

Apart from that, there are major projects deveopments in the city like the Lae Tidal  Basin Project and the Lae to Nadzab four-lane highway, which are projects that will use parts of traditional land areas.