Image: The site for the proposed Wafi-Golpu mine.

The Wafi-Golpu project could be ‘multi-generational’ according to Bryan Bailie, Executive Project Director of the Wafi-Golpu Joint Venture. He told the Papua New Guinea Mining and Petroleum Investment Conference in Sydney last week that the intention is to roll out the project in stages.

Bailie said the Wafi-Golpu project has the potential to be a ‘long duration sustainable mining operation’ that could last ’28 to 35 years or more’.

If developed, he said, the mine will be the largest underground mine in PNG and the first green field mine development since the Harmony Gold Hidden Valley mine commenced production in 2009.

Bailie said the resource at Wafi-Golpu is estimated to be 820 million tonnes of mineralised ore at 1.05 per cent copper and 0.7 per cent grams of gold.

‘A multi-staged development strategy is the optimal approach to mining this substantial mineral resource.’

‘The inherent value proposition lies in this mineralised body having multi-generational potential derived from its large scale, its high grade and its embedded optionality,’ he said. 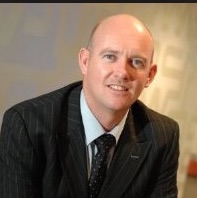 Bailie said a multi-staged development strategy is the ‘optimal approach to mining this substantial mineral resource’.

He said the project would be rolled out in a number of steps to help manage the risk.

Bailie said the emphasis would be on ‘risk mitigation before further investment’, which would make it easier to align the roll out of the project with changes in the commodity markets and the ‘dynamic and fluctuating external environment’.

Bailie said the Wafi-Golpu Joint Venture, which is equally owned by subsidiaries of Newcrest Mining and Harmony Gold, will roll out the project in stages, targeting its first production from Blockade 1, which is located 980 metres below the surface. He said this will enable the extraction of 8 million tonnes of ore over a four-year period at a peak annualised production rate of 3 million tonnes per annum.

He said the aim will be to mine the high grade ore body first to generate cash flow to support the construction of Blockade 2.

‘Blockade 1’s production is anticipated to occur in the 60th month and Blockade 2’s production will be achieved in month 85.’

‘Mining of Blockade 1, however, is limited to the duration it will take to bring Blockade 2 into production,’ he said.

Blockade 2, said Bailie, is located a further 680 metres below Blockade 1. ‘This will extract 141 million tonnes of ore over a 3-4 year period at a peak annualised production rate of 6 million tonnes per annum. This is a big ore body.’

Bailie said Blockade 1’s production is anticipated to occur in the 60th month and Blockade 2’s production will be achieved ‘in month 85 with a further 10-month period required to ramp it up to 6 million tonnes per annum.’

‘PNG presents a challenging environment in the design and operation of terrestrial tailings storage facilities, primarily due to mountainous terrain, the high rainfall, poor conditions for containment bores, and limited availability of land due to toApography, the environment and social heritage concerns.’

‘Much of the existing Lae infrastructure, particularly hospitals, educational facilities housing roads etc. will have to be substantially upgraded to support a long duration mine.’

The project will require reliable low cost bulk power supply, a stable low outage, an electricity transmission system and new access roads from the Highlands Highway to the mine site boundary, he said.

He also called for the Lae Airport to be updated to international status and for improvements to the marine port facility for the shipping of concentrate.

‘Much of the existing Lae infrastructure, particularly hospitals, educational facilities housing roads etc. will have to be substantially upgraded to support a long-duration mine.’

Bailie added that there is a ‘very challenging economic environment’ because of  slowing demand for global metals, depressed commodity prices and weakening investor demand for large scale mining projects.

‘Project success in such an environment is therefore highly dependent on regulatory and fiscal stability, sustained government and landowner community support and the timely granting of our permits.’