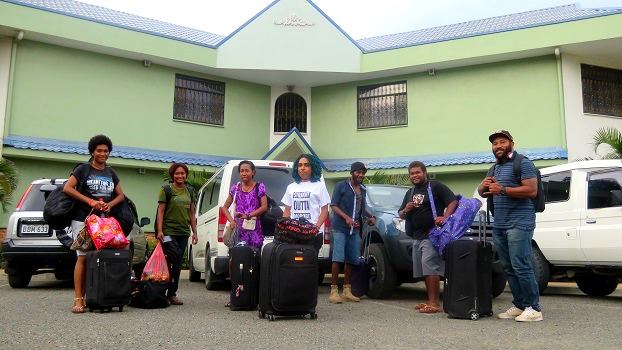 EMTV’s Vocal Fusion (VF) Battle of Seasons 3 and 4 has begun as contestants fly in to Port Moresby today from various locations in the country via Vocal Fusion Official Carrier, PNG Air.

The competition which will begin on March 1 involves top-tier contestants of the VF Seasons 3 and 4.

Arriving in Port Moresby today are eight contestants of both seasons from Mt Hagen, Lae, Madang, Kokopo and Alotau.

Arriving with the team, Ben’Oba and Elizah are Grand Winners of Season 3 and 4 respectively.

Ben’Oba walked away with a cash prize of K50,000 from Vocal Fusion eight months ago while Elizah won himself the brand new 2016 model Toyota Hilux proudly sponsored by Ela Motors only four months ago.

Settling in at Dream Inn Castle Apartments this afternoon, EMTV VF Official Accommodation Partner, Dream Inn and the VF officials make sure the contestants are well taken care of during their stay for the Battle of Seasons 3 and 4 in the nation’s capital.

The arriving team were happy to be back and thank EMTV Vocal Fusion for the opportunity and are looking forward to the competition in the coming weeks.

“We have signed contracts with Vocal Fusion and we are loyal to this,” says Mr Isaiah Manoah, 2nd Runner-up for VF Season 3.

Meanwhile, updates of the Battle of Seasons 3 and 4 will be brought to all families, friends and fans of the Vocal Fusion contestants by EMTV on TV, website, VF Facebook page and other social media platforms.