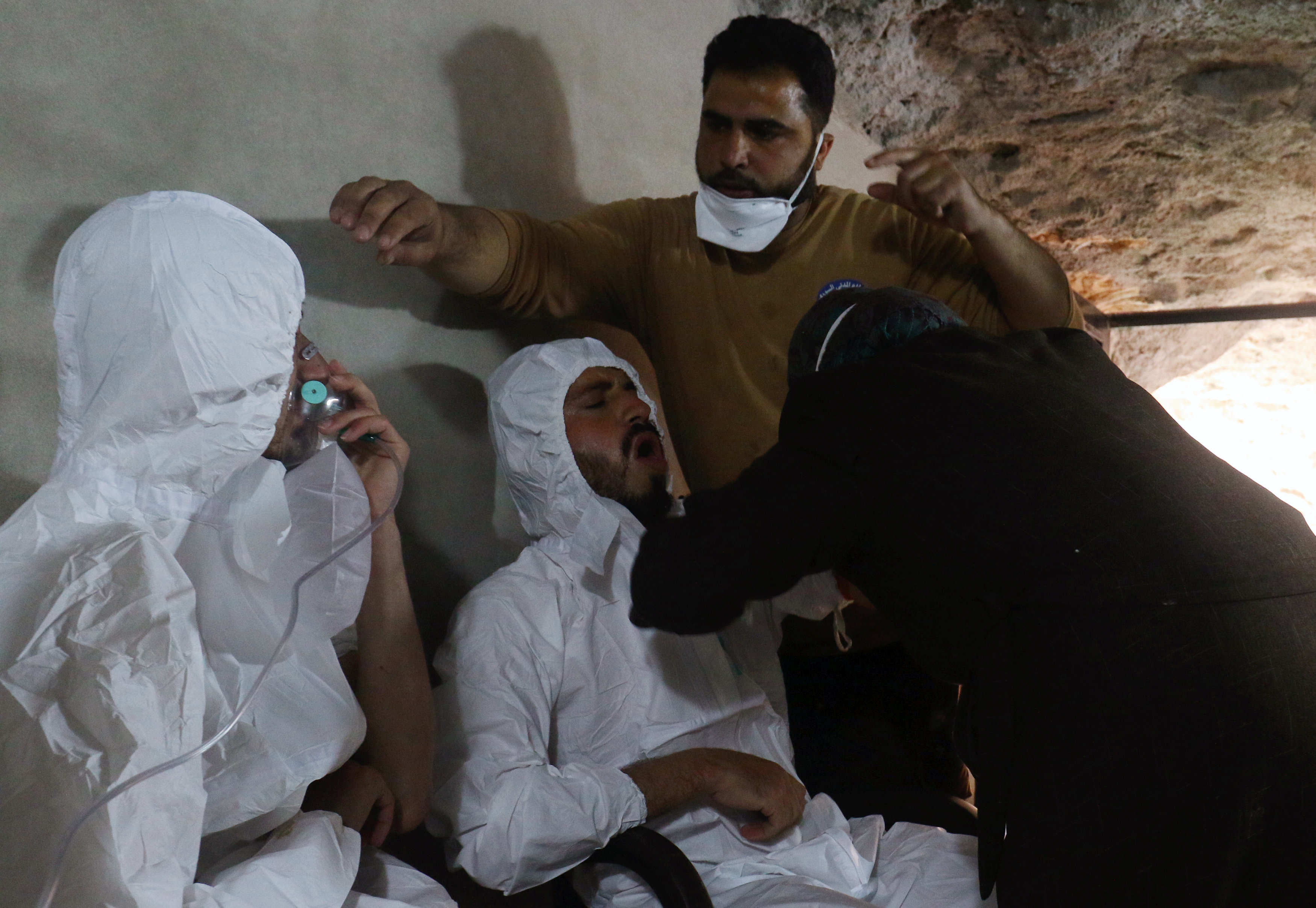 Image: A man breathes through an oxygen mask as another one receives treatments, after what rescue workers described as a suspected gas attack in the town of Khan Sheikhoun in rebel-held Idlib, Syria April 4, 2017. REUTERS/Ammar Abdullah

By Jeff Mason and Tom Perry

WASHINGTON/BEIRUT (Reuters) – U.S. President Donald Trump accused Syrian President Bashar al-Assad’s government of going “beyond a red line” with a poison gas attack on civilians and said his attitude toward Syria and Assad had changed, opening a rift with Moscow.

Trump declined to say how or whether his administration would respond but said the attack, which killed at least 70 people, many of them children, “crosses many, many lines”, an allusion to his predecessor Barack Obama’s threat to topple Assad with air strikes if he used such weapons.

“I will tell you, what happened yesterday is unacceptable to me,” Trump told reporters at a news conference with Jordan’s King Abdullah on Wednesday.

“And I will tell you, it’s already happened that my attitude toward Syria and Assad has changed very much,” though when asked at an earlier meeting whether he was formulating a new policy on Syria, Trump said: “You’ll see.”

U.S. officials rejected Russia’s assertion that Syrian rebels were to blame for the attack.

Trump’s comments, which came just a few days after Washington said it was no longer focussed on making Assad leave power, suggested a clash between the Kremlin and Trump’s White House after initial signals of warmer ties. Trump did not mention Russia in his comments on Wednesday but Secretary of State Rex Tillerson said it was time for Russia to think carefully about its support for Assad.

Western countries, including the United States, blamed Assad’s armed forces for the worst chemical attack in Syria for more than four years.

U.S. intelligence officials, based on a preliminary assessment, said the deaths were most likely caused by sarin nerve gas dropped by Syrian aircraft on the town of Khan Sheikhoun on Tuesday. A senior State Department official said Washington had not yet ascertained it was sarin.

Moscow offered an alternative explanation that would shield Assad: that the poison gas belonged to rebels and had leaked from an insurgent weapons depot hit by Syrian bombs.

A senior White House official, speaking on condition of anonymity, said the Russian explanation was not credible. “We don’t believe it,” the official said.

The United States, Britain and France have proposed a draft U.N. Security Council resolution that would condemn the attack; the Russian Foreign Ministry called it “unacceptable” and said it was based on “fake information”.

Moscow has proposed its own draft, TASS news agency quoted a spokesman of Russia’s U.N. mission, Fyodor Strzhizhovsky, as saying on Wednesday.

The U.S. ambassador to the United Nations, Nikki Haley, issued what appeared to be a threat of unilateral action if Security Council members could not agree.

“When the United Nations consistently fails in its duty to act collectively, there are times in the life of states that we are compelled to take our own action,” she told the council, without elaborating.

Trump described the attack as “horrible” and “unspeakable.” He faulted Obama for failing to carry through on his “red line” threat and when asked if he had responsibility to respond to the attack, said: “I now have responsibility”.

The new incident means Trump is faced with same dilemma that faced his predecessor: whether to openly challenge Moscow and risk deep involvement in a Middle East war by seeking to punish Assad for using banned weapons, or compromise and accept the Syrian leader remaining in power at the risk of looking weak.

While some rebels hailed Trump’s statement as an apparent shift in the U.S. position, others said it was too early to say whether the comments would result in a real change in policy.

Others who declined to be identified said they would wait and see.

Video uploaded to social media showed civilians sprawled on the ground, some in convulsions, others lifeless. Rescue workers hose down the limp bodies of small children, trying to wash away chemicals. People wail and pound on the chests of victims.

Labib Nahhas, chief of foreign relations at Ahrar al-Sham, one of the biggest rebel groups in western Syria, called the Russian statement factually wrong and one which contradicted witness accounts.

“This statement provides Assad with the required coverage and protection to continue his despicable slaughter of the Syrian people,” Nahhas told Reuters.

The incident is the first time U.S. intelligence officials have accused Assad of using sarin since 2013, when hundreds of people died in an attack on a Damascus suburb. At that time, Washington said Assad had crossed a “red line” set by then-President Obama.

Obama threatened an air campaign to topple Assad but called it off at the last minute when the Syrian leader agreed to give up his chemical arsenal under a deal brokered by Moscow, a decision which Trump has long said proved Obama’s weakness.

The Western-drafted U.N. Security Council resolution condemns the attack and presses Syria to cooperate with international investigators. Russia has blocked seven resolutions to protect Assad’s government, most recently in February.

Trump’s response to a diplomatic confrontation with Moscow will be closely watched at home because of accusations by his political opponents that he is too supportive of Russian President Vladimir Putin.

Trump’s relationship with Russia has deteriorated since the presidential election campaign, when Trump praised Putin as a strong leader and vowed to improve relations between the two countries, including a more coordinated effort to defeat Islamic State in Syria.

But as Russia has grown more assertive, including interfering in European politics and deploying missiles in its western Kaliningrad region and a new ground-launched cruise missile near Volgograd in southern Russia – an apparent violation of the 1987 Intermediate Nuclear Forces (INF) Treaty – relations have cooled, U.S. officials have said.

The chemical attack in Idlib province, one of the last major strongholds of rebels, who have fought since 2011 to topple Assad, complicates diplomatic efforts to end a war that has killed hundreds of thousands of people and driven half of Syrians from their homes.

Over the past several months, Western countries, including the United States, had been quietly dropping their demands that Assad leave power in any deal to end the war, accepting that the rebels no longer had the capability to topple him by force.

The use of banned chemical weapons would make it harder for the international community to sign off on any peace deal that does not remove him. Britain and France on Wednesday renewed their call for Assad to leave power.

Bernie Sanders promises to use executive order to legalize marijuana