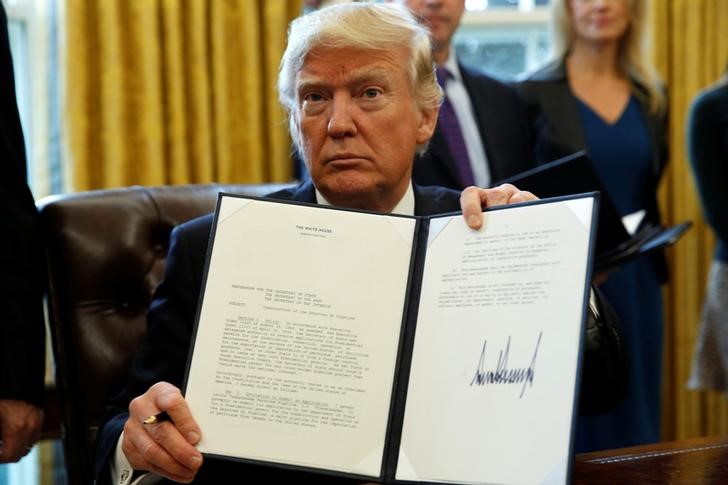 By Steve Holland and Valerie Volcovici

Oil producers in Canada and North Dakota are expected to benefit from a quicker route for crude oil to U.S. Gulf Coast refiners. But going ahead with the pipelines would mark a bitter defeat for Native American tribes and climate activists, who successfully blocked the projects earlier and vowed to fight the decisions through legal action.

Trump campaigned on promises to increase domestic energy production. Before taking office he said the Dakota pipeline should be completed and that he would revive the C$8 billion ($6.1 billion) Keystone XL project, which was rejected in 2015 by then-President Barack Obama.

Even though Canada is already the biggest source of U.S. crude imports, boosting the flow from a close ally is seen in Washington as a way to improve U.S. energy security.

“It goes to show we as a nation build infrastructure that is part of a comprehensive energy plan to make our energy secure,” Republican Senator John Hoeven of North Dakota told Reuters.

TransCanada Corp said it would resubmit an application for a permit for Keystone XL after Trump signed an order saying the company could re-apply. The application will be reviewed by the U.S. State Department, which has 60 days to reach a decision.

The orders look set to undo victories won by protesters in North Dakota against Energy Transfer Partners, which has nearly completed construction of the Dakota line. Despite the advanced phase of the project, the Obama administration in December denied the company a permit to tunnel under the Missouri River.

Protesters rallied for months against plans to route the $3.8 billion pipeline beneath a lake near the Standing Rock Sioux reservation, saying it threatened water resources and sacred Native American sites.

At one point, nearly 10,000 people had flocked to federal land in North Dakota, including 4,000 veterans after protests turned violent at times. The main protest camp has dwindled to several hundred after the Standing Rock tribe asked activists to leave when the U.S. Army Corps of Engineers denied the easement.

In a statement on Tuesday, the Standing Rock Sioux said they would fight the orders.

“Americans know this pipeline was unfairly rerouted towards our nation and without our consent. The existing pipeline route risks infringing on our treaty rights, contaminating our water and the water of 17 million Americans downstream,” said Dave Archambault II, chairman of the Standing Rock tribe.

“We think this is a great step forward for energy security in America,” said Ron Ness, the council’s president.

The more than 800,000 bpd Keystone XL pipeline would bring heavy crude from Canada to the U.S. Gulf Coast. The project was conceived nearly a decade ago, but since then the U.S. shale revolution has redefined oil flows, with domestic refiners finding themselves awash with supply and needing fewer imports.

Canadian Natural Resources Minister Jim Carr said in Calgary that Keystone XL has all the regulatory approvals it needs in Canada, and that the project would be “very positive for Canada.”

Environmental activists campaigned against the Keystone XL pipeline for more than seven years, eventually winning a victory when Obama rejected the project in 2015.

Trip Van Noppen, president of nonprofit environmental law organisation Earthjustice, said in a statement that Trump “appears to be ignoring the law, public sentiment and ethical considerations” with the decision.

TransCanada shares closed up 2.7 percent on the Toronto Stock Exchange.

Trump said on Tuesday in Washington that Keystone XL would create 28,000 jobs, but that figure is at odds with a 2014 U.S. State Department environmental study that said the project would create 3,900 construction jobs and 35 permanent jobs.

Shares of ETP, the company building the 450,000 barrel-a-day Dakota pipeline, ended the day up 3.5 percent in U.S. trading.

Trump owned ETP stock through at least mid-2016, according to financial disclosure forms, and ETP’s chief executive, Kelcy Warren, donated $100,000 to his campaign.

‘STANDING WITH THE NATIVES’

The protest against the 1,172-mile (1,885 km) Dakota pipeline was concentrated around blocking a permit to tunnel under Lake Oahe, a reservoir that forms part of the Missouri River, adjacent to the Standing Rock reservation.

The Army Corps earlier this month said it would begin an environmental assessment that could delay the project further. Tuesday’s White House memoranda said the Army and the Army Corps of Engineers should review and quickly approve permits for Dakota Access.

In Cannon Ball, North Dakota, protesters, many of whom have stayed at the camp for months, said they would continue fighting to protect the environment.

“I’m staying here. I’m standing with the natives. This is our future,” said Benjamin Buffalo, 45, a Blackfeet tribal member from Browning, Montana.

At a protest in front of the White House, a few hundred demonstrators shouted slogans and carried signs, including one that read: “Now environmental rapist.”

“What happened today is an attack on our homes,” said Jade Begay, a spokeswoman for the Indigenous Environmental Network, which fights against mining and dumping on native lands. “We are going to continue to show up at your home, Donald Trump.”

In New York City, about 300 protesters gathered outside the Trump International Hotel and Tower, chanting slogans such as “If all lives matter, then Native lives matter” and “You can’t drink oil, even in the soil.”

Death toll rises to at least 36 from California warehouse inferno