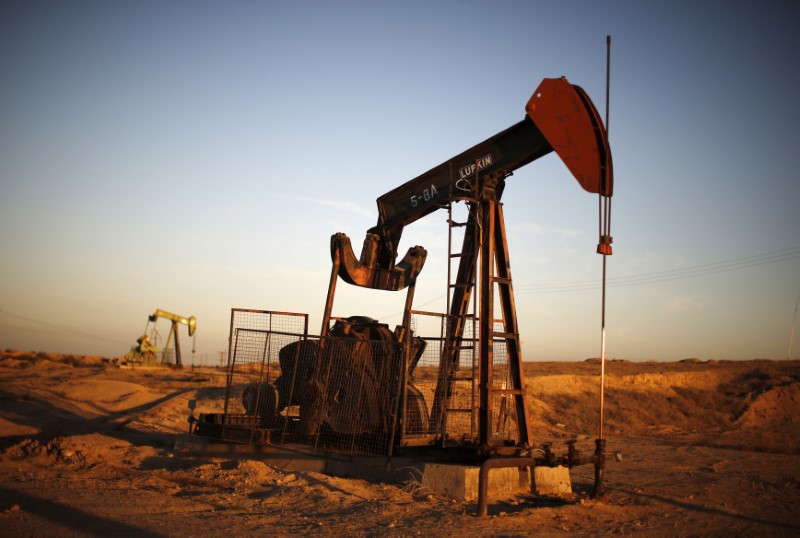 NEW YORK (Reuters) – Oil prices edged higher on Tuesday ahead of weekly U.S. inventory data on evidence the global market is tightening as lower production by OPEC and other exporters drains stocks.

Increased drilling in the United States, however, could keep a lid on prices.

That put WTI up for a fourth day in a row, its longest winning streak since the end of December.

The Energy Information Administration (EIA) will report its data at 10:30 a.m. EST (1530 GMT) on Wednesday.

Ministers from the Organization of the Petroleum Exporting Countries (OPEC) and big producers outside the group said on Sunday that of the almost 1.8 million barrels per day (bpd) they had agreed to remove from the market starting on Jan. 1, 1.5 million bpd had already been cut.

Saudi Arabia’s oil output is likely to drop to around 9.9 million bpd in January, according to industry sources and shipping data. The kingdom said it pumped 10.47 million bpd in December.

“The comments out of OPEC are the primary reasons for the price increase on Tuesday. That and recent weakness in the dollar, which is actually masking some serious weakness in oil,” said Phil Davis, managing partner at PSW Investments in Woodland Park, New Jersey.

The U.S. dollar settled at a seven-week low against a basket of currencies on Monday, but was up nearly 0.15 percent Tuesday afternoon. A weaker greenback makes dollar-denominated crude less expensive for users of other currencies.

Bernstein Energy said global oil inventories declined 24 million barrels to 5.7 billion barrels in the fourth quarter of last year from the previous quarter. This amounts to about 60 days of world oil consumption.

“This is the biggest quarterly decline since the fourth quarter of 2013, confirming that inventory builds are now reversing as the market shifts from oversupply to undersupply,” Bernstein analysts said in a note to clients.

Analysts, however, estimated U.S. crude stocks increased by about 2.8 million barrels in the week to Jan. 20.

The push by Republicans in the U.S. House of Representatives for a shift to border-adjusted corporate tax (BTA) could push WTI prices higher than Brent, triggering large-scale domestic production, according to analysts at Goldman Sachs.

Brent’s premium to narrowed on Tuesday by about 26 cents to $2.22 per barrel.

“OPEC is gradually coming to the realization that they may have received more than they bargained for in re-activating U.S. drilling activity,” Jim Ritterbusch, president of Chicago-based energy advisory firm Ritterbusch &amp; Associates, said in a note.

U.S. oil production has risen by more than 6 percent since mid-2016, though it remains 7 percent below the 2015 peak. It is back to levels reached in late 2014, when strong U.S. crude output contributed to a crash in oil prices.

A refugee will be a torch bearer in 2016, Olympic committee says