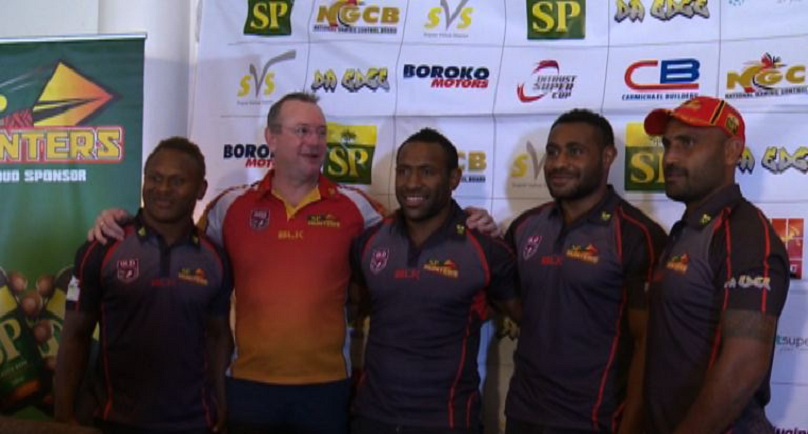 Like every young boy, new NRL recruits Stanton Albert, Wartovo Puara Junior and Thompson Teteh had dreams of playing in the Australian National Rugby League competition. That dream is now close to becoming a reality.

South Sydney bound duo Puara Junior and Teteh will take up a six weeks training and trial contract with the reigning premiers, with the possibility of being signed up for the 2015 season, while Albert has been signed on a two year deal to join his elder brother Wellington Albert and fellow Papua New Guinean James Segeyaro at Penrith Panthers.

Nineteen year old Stanton Albert from Mendi in the Southern Highlands Province was drafted into the SP PNG Hunters squad early this year. He was selected in the Junior PNG Kumuls for the Under 19 Commonwealth Rugby League championships in Glasgow in June where they won the  title against Australia. Stanton was named player of the tournament

Like his elder brother Wellington, Stanton’s two year deal will see him turn out for the Under 20 next year and will cut into the top 25 Penrith Panthers squad in 2016.

South Sydney is where Wartovo Watts, Puara Junior and Thompson Teteh are headed to. From the red and green colors of Rabaul Agmark Gurias where he was a student in their junior ranks, via the red, black and gold of PNG Hunters and Kumuls, Watts has the golden opportunity to earn another beloved red and green jersey with South Sydney and match his skills against some of the best dummy halves in Segeyaro, Cameron Smith and so on.

As for Goroka Gahuku junior from the Eastern Highlands, Thompson Teteh also has that rare opportunity to play alongside the world’s best centre in Greg Inglis. Although Inglis plays fullback for the Rabbitohs, the chance to train and gain further knowledge from the Australian Kangaroos centre is there for the taking.

The trio will leave on January 2 to chase their dreams.