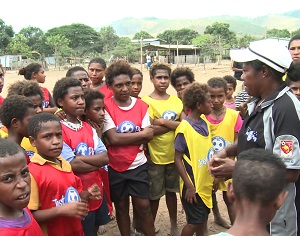 The Teteh community is known as a no-go zone in Port Moresby.

The community has a reputation for illegal activities but this will now be a thing of the past, with the introduction of Just Play, a football program to engage the children, giving prominence to scouting talents.

The struggle for a better life is apparent just by looking at the Teteh community youngsters. Most of them aren’t schooling for obvious reasons. Their school classroom, built in 2002 next to the Catholic hut provides elementary level education to the Teteh community.

‘Just Play’ is a football program under the PNG Football Association integrated with schools and community programs to teach young ones the game of soccer.

There is deeper meaning to that with a community like this involved.

Under the scorching Port Moresby heat, the Teteh Community Oval went up in dust with eager football learners who weren’t afraid to show off their skills.

There were only two main water taps, supplying the entire community.

With the introduction of other ethnic groups, the community has declared to work in partnership with the government to bring vital services. ‘Just Play’ is the first sports development program to make a breakthrough and the community gratefully welcomes further development.

Polye: Enough of Violence Against Women