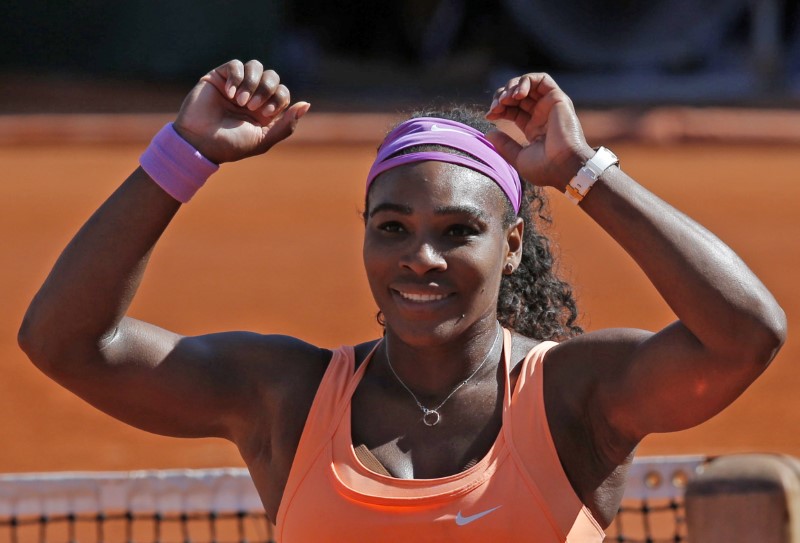 Image: FILE PHOTO: Serena Williams of the U.S. celebrates after winning her women’s singles final match against Lucie Safarova of the Czech Republic at the French Open tennis tournament at the Roland Garros stadium in Paris, France, June 6, 2015. REUTERS/Gonzalo Fuentes

LONDON (Reuters) – Brad Gilbert reckons 40 women have a shot at the Wimbledon title which, depending on which side of the fence you stand, means either the WTA Tour is blessed with extraordinary depth or chronically short of capable understudies for Serena Williams.

Its supporters will say the unpredictability adds to the spectacle, while detractors will point to the fact that, unlike in the men’s game which is still in the midst of a golden era, there are few players capable of carrying the sport forward.

With Serena on maternity leave since winning a 23rd major title at this year’s Australian Open, the door has been open for a bunch of new names to barge through.

Jelena Ostapenko did it at the French Open in stunning style to take the title, prompting none other than Chris Evert to proclaim the birth of a new star.

Only time will prove whether the 20-year-old Latvian can establish herself as a consistent grand slam challenger.

In the past years that has been something beyond pretty everyone apart from Williams, Maria Sharapova, who will be missing from Wimbledon as she makes a stuttering return from a doping ban, and former world number one Victoria Azarenka who is in the early days of a comeback from having a baby.

Current world number one Angelique Kerber enjoyed an incredible 2016, winning two majors, but has struggled badly this year. The same can be said of Spain’s Garbine Muguruza who has faded since winning the 2016 French Open.

Twice champion Petra Kvitova returns to Wimbledon having recovered from injuries sustained in a stabbing last December and the fact that she is being tipped as favourite by many speaks volumes for the vacuum that currently exists.

“I said that at least 30 women could win the French, and I wouldn’t even have put Ostapenko’s name on the 30 because she hadn’t won a WTA tournament,” former world number four Gilbert, who will be one of ESPN’s analysts during Wimbledon, said this week as he looked ahead to the championships.

“I will double down and say that 40 women could win Wimbledon. The field, without a doubt, is the clear favourite.”

Incredibly, since Williams won the Australian Open no fewer than 22 players have won titles on the WTA Tour.

Only world number five Elina Svitolina from Ukraine, with four, and Russian world number 17 Anastasia Pavlyuchenkova, with two, have managed multiple titles since the Australian Open.

“I think at the top of the game, it’s very chaotic right now. I think there’s a lot of fragility,” 18-times grand slam winner Evert told an ESPN conference call.

“I think the players that have been at the top have not lived up to their billing. I feel terrible saying that, but everyone who’s reached number one, they haven’t carried on the momentum, and they haven’t stepped up and really embraced that position of leadership on and off the court.

“You really can’t count on any one player right now like you could count on Serena in the past.”

There are signs though that a brash new brigade, led by Ostapenko, could start to usher the old guard, the likes of the still dangerous Svetlana Kuznetsova, Venus Williams and Agnieszka Radwanska, out of the limelight.

Svitolina, 22, Madison Keys, 22, and Croatian Ana Konjuh, 19, are in a similar mould to Ostapenko, as is Estonia’s 21-year-old Anett Kontaveit who could be a dark horse at Wimbledon after winning the grasscourt title in Den Bosch this month.

“Everything is really open, everyone can win,” she told Reuters. “That’s great for women’s tennis. It’s interesting to watch and to follow.

“It gets a little boring if it’s always the same people.”