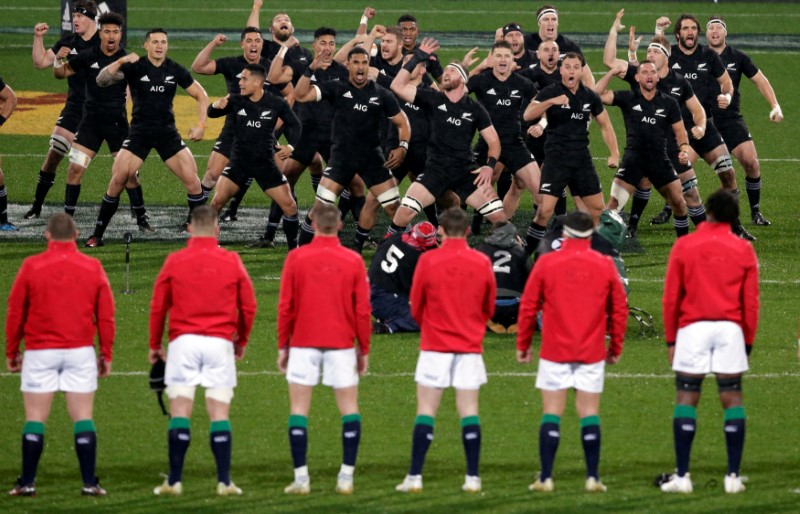 WELLINGTON (Reuters) – Owen Farrell slotted a 78th minute penalty to give the British and Irish Lions a 24-21 victory over 14-man New Zealand in the second test on Saturday to level up the series at 1-1 ahead of next week’s final clash in Auckland.

The All Blacks were a man down for 55 minutes after Sonny Bill Williams became only the third All Black, and the first since 1967, to be sent off in a test match when he was shown the red card for a shoulder charge on Lions winger Anthony Watson.

It was the first win for the Lions over the All Blacks since 1993 and the first defeat for the world champions on home soil in 48 tests going back to 2009.

All Blacks flyhalf Beauden Barrett kicked seven penalties but tries for Lions number eight Taulupe Faletau and scrumhalf Conor Murray helped level up the scores with 10 minutes to go, leaving Farrell to secure the victory with his fourth penalty.

“Credit to New Zealand, to play for so long with 14 men, they did extremely well,” Lions captain Sam Warburton said. “You have to score tries to beat these boys and we did that.”

The visitors had been criticised for their lack of physicality last week during the 30-15 first test loss and were far more aggressive on Saturday.

The introduction of Warburton allowed the visitors to attack the breakdown more consistently and shore up their fringe defence.

Despite having the advantage of the swirling northerly wind in the first half, the Lions turned down kickable penalties to put pressure on the All Blacks lineout defence.

With persistent rain showers sweeping across the ground, however, neither side was able to truly crack the either’s defence and the first half scoring was restricted to three penalties apiece to Barrett and Farrell.

The key moment came after 25 minutes, however, when Watson was being tackled by Waisake Naholo and Williams came in with a shoulder charge that made contact with the winger’s head

After consultation with television official George Ayoub, referee Jerome Garces had no hesitation in showing the red card.

The All Blacks, though, still dominated the first 20 minutes of the second half as the tourists’ discipline deserted them.

Barrett missed two penalties but also slotting three more to give his side an 18-9 lead before the Lions struck back with the game’s first try.

They finally managed to exploit the man advantage down the right and swept the ball back towards Faletau on the right wing and he crashed through the tackle of Israel Dagg to score.

Barrett added his seventh penalty before the Lions again attacked down the right and created a yawning gap for Murray to cross, with Farrell’s conversion levelling the score at 21-21 with about 10 minutes remaining.

Farrell then stepped up with three minutes remaining to send the massive sea of red-clad Lions fans in the 38,891-strong crowd into delirium.

“Plenty of effort but we weren’t just accurate,” All Blacks captain Kieran Read said. “Credit to the Lions they put us under pressure and scored some good tries.

“They were able to get on a roll in the second half and we couldn’t slow down their ball.

“It’s an effort, you never want to turn up and play with 14 men but we’ll turn up next week and look forward to it. It’s a three match series, can’t wait for it.”

A new island in the Mediterranean…just off Gaza