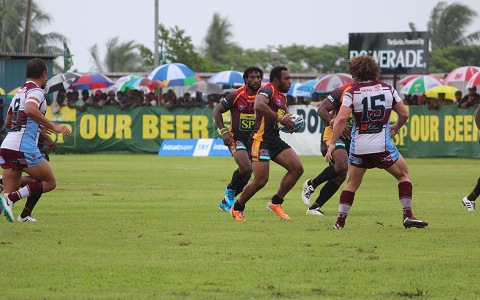 The Cutters made an emphatic comeback, hoping not to repeat the round two gaffes.

The Intrust Super Cup round 16 welcomed back the two teams that met in round two games.

The Hunters were superb thereon with emphatic 24 -16 could not ask for more as the Cutters with the last year’s champions tag remained hard beats.

But This time it was the Mackay Cutters that thwarted the uninterrupted winning streak of the SP PNG Hunters with an undisputed score line that called for a Marum’s coached side to recoup and fight back.

Despite drizzling weather, the two competition leaders were up for a season battle that went scoreless in a quarter of the half.

The Hunters were the real deal, hoping to give the title holders a real shake up but were unfortunate to lose speed machine Garry Lo to an injury followed by second rower Sabastian Pandia to a knee injury.

The Mackay Cutters boasted on their 18 -16 win against Wynnum Manly Seagull last weekend were capable of  a repeat upset as winger Liam Taylor beg a try in the corner.

The Hunters  struggled to bounce back but Cutters constant pressure saw them clinched a second from hooker Anthony Mitchell, leading at 10 points to nil at half time.

The determined tourists welcomed back Adex Wera to fullback but were dismayed to see Wartovo Puara Jnr join the injury queue.

The Cutters continued good performance as they capitalized on poor ball security by the tourists to score a third in the corner.

The Hunters late comeback through George Benson was not enough as Cutters Mitchell’s try under the post brought them to victory with 20 points to 4.

The Hunters now will have to speed up recovery before welcoming the East Tigers to their graveyard next weekend.