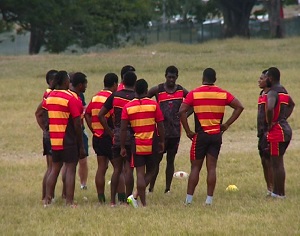 Following the official announcement of the PNG Pukpuks placement in Pool B for the 2015 HSBC Wellington Sevens, preparations should be tough, considering the break over the festive period.

The Pukpuks however, have built a constructive and winning formula over the past 12 months.

Although winning the cup may seem out of reach for the Pukpuks, their hunger and desire to improve the standards of rugby sevens in the country may just come through, with their one chance at playing at the second highest level of sevens competition.

There has been so much emphasis placed on the successof the national sevens team this year.

Social media platforms were buzzing with pride and enthusiasm, showing their support.

In contrast, when assessing the boy’s performance over a vast period of time, dating back almost ten years, the Pukpuks team of 2014 have truly set the benchmark and paved the way forward for rugby in the country.

Sydney Wesley, newly appointed coach for the 15’s national team, has been a part of the rugby fraternity for decades, and has seen the PNG Pukpuks successs and failures throughout.

However, Wesley says the boys need to build on their current reputation, as they now have a professional sporting image to uphold.

The Pukpuk Sevens will have a short two month turnover to prepare for what will be, their biggest international staging ever, since a decade ago.